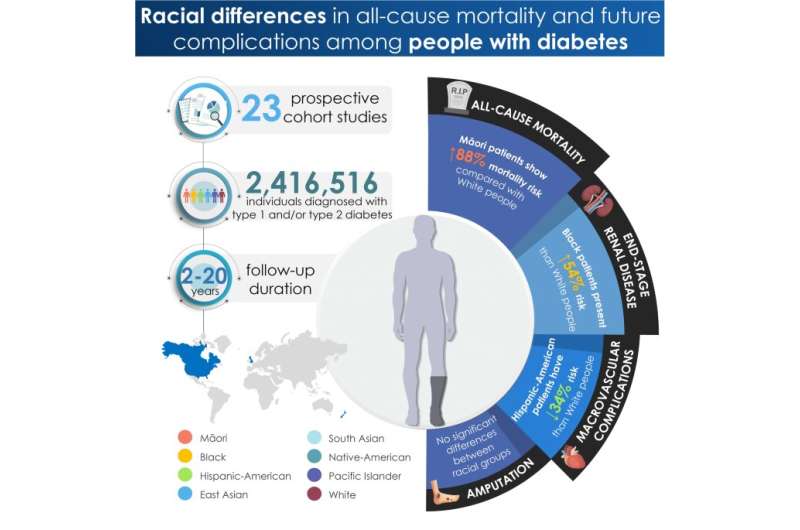 Professor and researcher of the Faculty of Nursing and Podiatry of the UV, Yasmín Ezzatvar, together with researchers from other centers, concludes that the racial or ethnic group of patients with type 1 and 2 diabetes mellitus influences the prognosis of the disease, due to differences in mortality, risk of kidney disease or risk of cardiovascular disease. In their research, they analyzed data from 2,416,516 diagnosed people. This is the first study to quantify these differences.

Diabetes mellitus is a metabolic disease characterized by high blood glucose levels, and represents one of the main causes of mortality worldwide. Compared to healthy people, patients with diabetes have a shorter life expectancy that is directly attributed to the development of complications from hyperglycemia, excess free fatty acids, and insulin resistance. The study published in journal Diabetología, ranked among the 10 most relevant in the Endocrinology and Metabolism category in the JCR and with an impact factor of 10.1, has shown that there is greater risk of presenting diabetic complications depending on the racial or ethnic group of the patient.

The study indicates that, compared to white people, those of Maori ethnicity had an 88 percent higher risk of mortality from all causes, Hispanic American patients have a lower risk of suffering from macrovascular complications of diabetes such as cardiovascular disease, and Black people have a 54 percent increased risk of end-stage renal disease. No differences have been found in the risk of other complications, such as amputations, among people of other racial or ethnic groups.

Therefore, the study authors consider that “the use of racial / ethnic categories should be included in international clinical guidelines, at least until other more precise predictors are available.” This way, knowing the susceptibility of developing certain clinical complications associated with specific racial or ethnic groups will not only help to identify those patients who are at higher risk, but will also allow the medical community to advance one step further towards the more specific objective to “Identify inter-individual differences, even within each racial / ethnic group,” which would help to personalize and individualize treatment for each patient.

Yasmín Ezzatvar, together with Robinson Ramírez-Vélez and Mikel Izquierdo (Public University of Navarra-UPNA) and Antonio García-Hermoso (Navarrabiomed), also add that the current scientific literature includes studies where many racial / ethnic groups are very underrepresented, which is a problem that needs to be solved urgently.