Study: Losing your cool or overdoing it at the gym could cause stroke

Losing your temper or working out too hard at the gym may be contributing factors in up to one in 11 strokes, study suggests

Getting emotionally worked up or exercising too vigorously could be triggers for a stroke, a global study has suggested.

Research of more than 13,000 stroke patients found that one in 11 survivors experienced a period of anger or upset in the hour leading up to it.

It also found one in 20 patients had engaged in heavy physical exertion, like weightlifting.

The suspected triggers were identified as part of the global Interstroke study — the largest research project of its kind, which is co-led by National University of Ireland Galway.

It analysed 13,462 cases of acute stroke, involving patients with a range of ethnic backgrounds in 32 countries, including the UK and Ireland — but did not suggest the mechanism by which exertion or anger cause strokes.

Previous research suggests increased blood pressure during either event can increase the risk of a blockage in arteries delivering oxygen to the brain.

The new paper, published in the European Heart Journal, suggested anger or emotional upset was linked to around a 30 per cent increase in risk of stroke.

It also found  that heavy physical exertion was linked to around a 60 per cent increase in risk of a rare form of stroke that causes bleeding in the brain.

Researchers emphasised that exercise reduces the long-term risk of strokes and warned people not to be put off regular physical activity in the short-term.

Stroke is a leading global cause of death or disability. There are more than 100,000 strokes in the UK each year, causing 38,000 deaths. About 1.3million people in the UK are survivors of stroke. 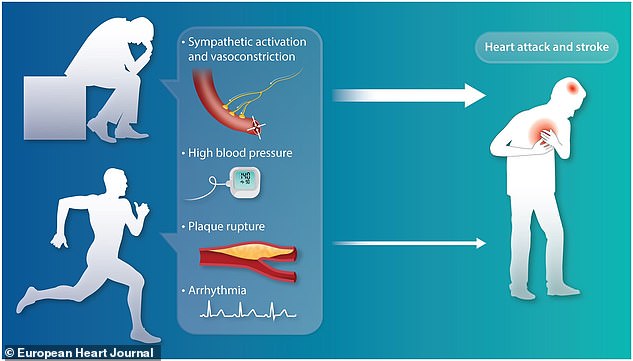 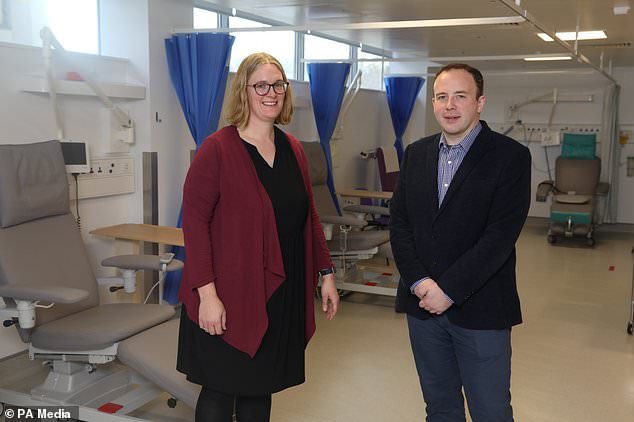 To stay healthy, adults aged 19 to 64 should try to be active daily and get:

A good rule is that one minute of vigorous activity provides the same health benefits as two minutes of moderate activity.

One way to do your 150 minutes of weekly physical activity is to do 30 minutes on five days every week.

All adults should also break up long periods of sitting with light activity.

The researchers compared patients’ behaviour the hour before a stroke with the same hour a day before the onset of symptoms to isolate short-term factors that caused the attack.

One of the lead researchers Andrew Smyth, professor of clinical epidemiology at NUI Galway, said the risk of emotional upset causing a stroke was higher for patients without a history of depression.

And physical exertion paused a greater risk in women but lower risk in those with a healthy BMI.

Professor Smyth said: ‘Stroke prevention is a priority for physicians, and despite advances it remains difficult to predict when a stroke will occur.

‘Many studies have focused on medium- to long-term exposures, such as hypertension, obesity or smoking. Our study aimed to look at acute exposures that may act as triggers.’

The research analysed patterns in patients who suffered ischaemic stroke — the most common type of stroke, which occurs when a blood clot blocks or narrows an artery leading to the brain — and also intracerebral haemorrhage — which is less common and involves bleeding within the brain tissue itself.

‘Our research found that anger or emotional upset was linked to an approximately 30 per cent increase in risk of stroke during one hour after an episode — with a greater increase if the patient did not have a history of depression.

‘The odds were also greater for those with a lower level of education.

‘We also found that heavy physical exertion was linked to an approximately 60 per cent increase in risk of intracerebral haemorrhage during the one hour after the episode of heavy exertion.

‘There was a greater increase for women, and less risk for those with a normal BMI.

‘The study also concluded that there was no increase with exposure to both triggers of anger and heavy physical exertion.’

Co-author of the paper Dr Michelle Canavan, consultant stroke physician at Galway University Hospitals, said: ‘Our message is for people to practise mental and physical wellness at all ages.

‘But it is also important for some people to avoid heavy physical exertion, particularly if they are high-risk of cardiovascular, while also adopting a healthy lifestyle of regular exercise.’

‘Some of the best ways to prevent stroke are to maintain a healthy lifestyle, treat high blood pressure and not to smoke,’ Prof O’Donnell said.

‘But our research also shows other events such as an episode of anger or upset or a period of heavy physical exertion independently increase the short-term risk.

‘We would emphasise that a brief episode of heavy physical exertion is different to getting regular physical activity, which reduces the long-term risk of stroke.’

THE CAUSES OF STROKE

There are two major kinds of stroke:

An ischemic stroke – which accounts for 80 per cent of strokes – occurs when there is a blockage in a blood vessel that prevents blood from reaching part of the brain.

The more rare, a hemorrhagic stroke, occurs when a blood vessel bursts, flooding part of the brain with too much blood while depriving other areas of adequate blood supply.

It can be the result of an AVM, or arteriovenous malformation (an abnormal cluster of blood vessels), in the brain.

Thirty percent of subarachnoid hemorrhage sufferers die before reaching the hospital. A further 25 per cent die within 24 hours. And 40 per cent of survivors die within a week.

Age, high blood pressure, smoking, obesity, sedentary lifestyle, diabetes, atrial fibrillation, family history, and history of a previous stroke or TIA (a mini stroke) are all risk factors for having a stroke.

SYMPTOMS OF A STROKE

Of the roughly three out of four people who survive a stroke, many will have life-long disabilities.

Both are potentially fatal, and patients require surgery or a drug called tPA (tissue plasminogen activator) within three hours to save them.