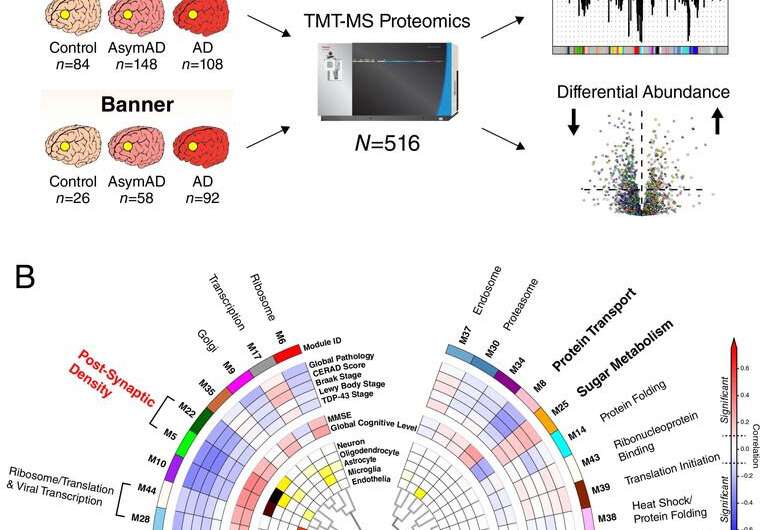 Researchers at Emory University School of Medicine have recently carried out a large-scale analysis of the brains of patients with Alzheimer’s disease (AD). Their findings, published in Nature Neuroscience, unveiled a series of disease-related changes in protein co-expression modules, which were not identified when examining RNA networks in the same brain regions.

The team that conducted the study is part of the Accelerating Medicines Partnership for Alzheimer’s Disease (AMP-AD) consortium, a collaboration between different government, industry, academic, and non-profit organizations. The key mission of the AMP-AD consortium is to develop new drug targets and biomarkers for AD.

To do this, participating organizations are using multi-omic approaches (i.e., methods for biological analysis) and other systems biology tools to examine the complex pathophysiology of the disease. This could in turn help to identify new drug targets and disease biomarkers. The group at Emory University School of Medicine specifically focuses on the field of proteomics (i.e., studies exploring proteomes and their functions).

“We are taking an unbiased discovery approach by looking at the proteomic changes that occur in the brain of those with AD,” Erik Johnson, one of the researchers who carried out the study, told MedicalXpress. “The basic idea behind our work is that there is a lot going on in the AD brain, and we want to characterize the full landscape of these pathological changes.”

In 2020, Johnson and his colleagues published a paper that quantified approximately 3000 proteins by analyzing images of hundreds of brains, to specifically characterize proteomic changes associated with AD. Building on this previous work, the team now set out to dig deeper into the brains of patients with AD, further examining proteomic changes in relation to other types of -omic data.

The researchers analyzed approximately 500 brains sourced by the Religious Orders Study and Memory and Aging Project (ROSMAP) and the Banner Sun Health Research Institute. To conduct their analyses, they used a recently developed and advanced mass spectrometry-based proteomic approach. This allowed them to quantify almost 9000 proteins across the brain tissues they analyzed, which is almost three times the number of proteins quantified in their previous study.

“This approach allowed us to perform a much deeper and richer analysis of the AD brain proteome,” Johnson explained. “We were able to leverage genetic and transcriptomic data from many of the same tissues to integrate the proteomic findings with these other types of -omic data. The ROSMAP and Banner cohorts are also well phenotyped, so this allowed us to relate the changes we observed to other important aspects of the disease, such as cognitive function.”

By analyzing a greater number of proteins, Johnson and his colleagues were ultimately able to pinpoint important proteomic changes in the AD brain that they did not detect in their prior study. Some of these changes were related to proteins that correlate with the aggregation of amyloid-beta peptides. The aggregation of amyloid-beta peptides into plaques is a cardinal feature of AD.

Another group of proteins identified by the researchers in their analyses of AD brain tissue are those involved in Mitogen-Activated Protein Kinase (MAPK) signaling and energy metabolism. These proteins were found to be closely correlated with cognitive decline.

“Interestingly, these two groups of protein changes, along with many other protein changes in the brain, were not observed at the RNA level,” Johnson explained. “This is an important finding, as it really suggests that we need to look at multiple types of data when trying to understand AD.”

In their next studies, Johnson and his colleagues plan to conduct similar analyses on the brains of patients who were affected by other neurodegenerative diseases. This will help them to determine whether the proteomic changes they unveiled are specific to AD or if they are also associated with other diseases.