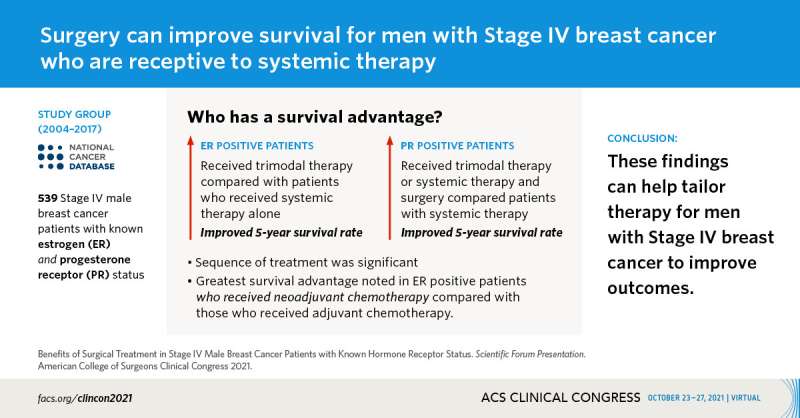 Men with Stage IV breast cancer and known estrogen (ER) and progesterone receptor (PR) status benefit from surgical intervention and from trimodal therapy (systemic therapy, surgery, and radiation), according to a study presented at the virtual American College of Surgeons (ACS) Clinical Congress 2021.

The National Comprehensive Cancer Network guidelines to treat men with Stage IV breast cancer recommend systemic therapy, with surgery to be used to minimize symptoms such as ulcerations, pain, or bleeding, said first author Kelly A. Stahl, MD, a surgical resident at Penn State College of Medicine, Hershey. However, new study findings, show that surgery does have survival benefits for men with Stage IV breast cancer, she said.

“We need to re-examine the notion that Stage IV breast cancer in men is so dire that there is no survival benefit to surgical intervention,” said Daleela G. Dodge, MD, FACS, a general surgeon at Penn State Health Milton S. Hershey Medical Center in Hershey, PA, and a co-author of the study.

“For this subgroup of patients who are responsive to systemic therapy and do not have a lot of metastatic burden, we’d like there to be a reconsideration of best practices.”

“We have a whole month devoted to breast cancer awareness for women, but it’s not well known that men can get it, too, and that some men even have a genetic predisposition to getting it,” Dr. Stahl said.

Unfortunately, low public awareness has contributed to the fact that 6 percent of women compared with 10 percent of men are not diagnosed until they have Stage IV cancer. In addition, 40 percent of male breast cancer patients do not get diagnosed until Stages III or IV even though breast cancer is easier for male patients to detect on their own, said Dr. Dodge. She added, “Men have a worse prognosis based on late diagnosis, so awareness is important.”

The authors were surprised at how many patients they were able to find that fit the parameters of their study, crediting the extensive dataset in the National Cancer Database (NCDB). The researchers identified 539 Stage IV breast cancer patients with known ER/PR status from 2004-2017 in the NCDB. Chi-square tests examined subgroup differences between the treatment modalities received. Overall survival was assessed using the Kaplan-Meier method. Multivariate Cox proportional hazard models examined factors associated with survival.