The five best AND worst Christmas foods for fertility

Christmas turkey could help to boost fertility for couples.

But they may want to think about going easy on the pigs in blankets and hiding the sherry out of sight.

The traditional turkey contains iron, and evidence suggests iron boosts fertility in women, according to fertility specialist Dr Gillian Lockwood, in advice on how to eat this festive season for couples trying to conceive. 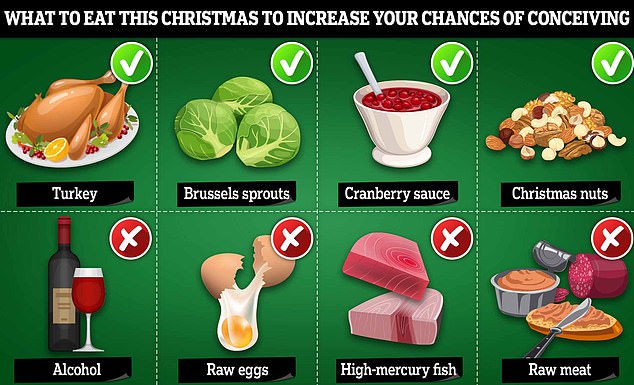 A handful of festive nuts is good for men trying to get their partner pregnant, as nuts contain zinc and selenium, which are good for sperm.

Brussels sprouts are a good idea because they contain folates, which is important for preventing birth defects during pregnancy, and the reason why women are advised to take folic acid while they are trying to get pregnant.

Meals should be based on potatoes, bread, rice, pasta or other starchy carbohydrates, ideally wholegrain, according to the NHS

• Base meals on potatoes, bread, rice, pasta or other starchy carbohydrates, ideally wholegrain

• 30 grams of fibre a day: This is the same as eating all of the following: 5 portions of fruit and vegetables, 2 whole-wheat cereal biscuits, 2 thick slices of wholemeal bread and large baked potato with the skin on

• Eat some beans, pulses, fish, eggs, meat and other proteins (including 2 portions of fish every week, one of which should be oily)

• Choose unsaturated oils and spreads and consuming in small amounts

However Dr Lockwood advises those trying to start a family against drinking at Christmas, as if a woman is already pregnant and has not realised it, the public health advice is not to consume alcohol at all.

Pigs in blankets contain processed meat, which is high in calories, and are less lean than turkey.

Decadent deserts may look delicious, but are often ultra-processed.

These last two options may also be problematic because they run the risk of people piling on too many pounds at Christmas.

Obesity in both men and women reduces the chances of them conceiving, as numerous studies have shown.

Dr Lockwood, whose clinic made history by producing the first baby from a frozen egg in the UK in 2002, and who is providing advice on behalf of the company Fertility Family, said: ‘Good pre-pregnancy and pregnancy nutrition requires consideration of what the mother to be and her baby need.

‘For those trying to conceive – and who are not prepared to wait until next year – there are some clear culinary dos and don’ts they may like to consider.’

It is unclear how much of a role nutrition plays in conception, compared to more significant factors like age and obesity, and evidence can be uncertain because people who eat healthily tend to do other healthy things, like staying slim and exercising regularly, which are good for fertility.

However there are key nutrients which are known to help improve sperm, and overall healthy people are likely to be more fertile.

For couples trying to conceive, Dr Lockwood advises against raw meat and eggs, which can lead to food poisoning, with illness likely to reduce the changes of pregnancy.

If couples are already pregnant without realising, these foods are advised against, as is fish high in mercury, like swordfish.

But the good news for Christmas Day is that cranberry sauce contains antioxidants, which is good for general health, so may benefit fertility.

Vegetarians and vegans can feast on a nut roast instead of turkey, benefiting from the vitamins and minerals they contain.

Meanwhile walnuts are a good snack for men as they boost sperm vitality, and roasted chestnuts may also have fertility benefits for men.

If you enjoyed reading this article…

Revealed: Some of the UNHEALTHIEST vegan alternatives at Britain’s leading restaurants… including dishes saltier than KFC chicken, fattier than McDonald’s burgers and just as calorific as pizza from Domino’s

The secret to healthy bones? You can’t beat onions! DR MEGAN ROSSI reveals the things everyone should be doing to protect them

Trying to lose weight? The doctor might not be much help! Researchers find GPs mostly tell patients to ‘eat less and do more’