The workout-from-home era is over. Can Apple’s virtual gym survive?

Tied to Apple’s enormously popular Watch, Fitness+ releases workout videos every week across just about every type of exercise: strength, high-intensity cardio, rowing and running, dance and even meditation sessions. (Users need a Watch to activate Fitness+ and can follow guided workouts on the iPhone, iPad or Apple TV, or on the Watch itself if they’re on the go). The service launched in December 2020, but until now its headquarters – a Santa Monica landmark that Apple converted to a fitness factory – has operated in a COVID-safe bubble. Its doors are finally open to journalists, and Apple couldn’t be more thrilled to show it off. 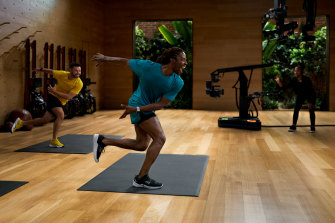 Until now, Apple’s LA-based Fitness+ headquarters operated inside a COVID-19 bubble. Recently it opened its doors to journalists from around the world.

Inside, Fitness+ HQ looks exactly like what you’d expect from Apple: modern, clean, top-of-the-line, utterly stunning. The tech giant wanted to ensure the space was “beautifully designed, and really curated and crafted in a way that people could tell that it was Apple”, says Jay Blahnik, Apple’s vice president of Fitness Technologies.

The centrepiece of Fitness+ is the vast, warmly lit studio where trainers film their workouts before a small army of robot cameras. Moving around the rest of the building, I’m guided through rehearsal spaces where trainers collaborate to perfect their workouts; production suites supporting the publication of up to 35 new workout videos a week; and a walk-in wardrobe stuffed with carefully labelled Nike gear in every colour and design.

If you’re into fitness, going behind the scenes at Fitness+ is like visiting Disneyland. And if you’re into digital-content production, the scale of this operation is just incredible. “It’s a lot more than trainers and a few cameras,” says Apple’s chief operating officer, Jeff Williams, in an interview with The Sydney Morning Herald and The Age. “[It’s] expertise across many, many disciplines.”

That expertise combines into a valuable service (Fitness+ subscriptions start at $14.99/month) that elevates Apple Watch above rival smartwatches – Fitbit Premium, probably the closest competitor to Fitness+, doesn’t match its breadth of content. 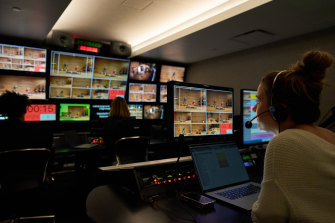 Behind the scenes at Apple Fitness+ HQ.

The biggest rival for Fitness+ isn’t another product, but shifting lifestyles. Its launch was perfectly timed for the pandemic, when getting to a gym was impossible. During Sydney’s 2021 lockdown, I used Fitness+ at home almost every day – its trainers felt like my friends. But my IRL gym is reopened, and now so busy it’s near-impossible to use in peak hour. If Australians are over exercising at home, is that a bad omen for Fitness+?

Look to other big players in fitness tech, and the future of virtual workouts seems cloudy. Take state-of-the-art exercise bike Peloton, the pandemic darling whose stock price and customer base soared in 2020. In 2021, it launched in Australia in a blaze of hype. In 2022, its value has plummeted. Mr Big’s death-by-Peloton in the Sex and the City reboot seemed a harbinger of its fate.

Or take Lululemon, which paid $US500 million ($715 million) in 2020 to acquire Mirror – basically a big, stylish screen that streams workouts into your home. More recently, Mirror’s user numbers have dropped, and Lululemon has revised revenue expectations for the product. 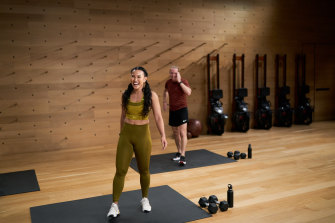 Trainers are filmed by an army of robots at Apple’s Fitness+ HQ in Santa Monica.

Apple won’t comment on Fitness+ usage, but the unsteady performance of its rivals isn’t necessarily a bad sign. For starters, its Watch costs as little as $299 – well below $2145 for a Peloton bike or $US1495 ($2140) for a Mirror. And unlike an unwieldy bike or giant screen, Fitness+ can be used anywhere — which is exactly how Apple designed it (and how I continue to use it, ending weights workouts at the gym with Fitness+ core or Pilates).

“We never anticipated this as an only work-from-home product,” says Williams, who does Fitness+ rowing workouts on machines at his gym.

Compared to the portability of Fitness+, Peloton and Lululemon’s devices may end up being the 2020s equivalent of that ab contraption under your parents’ bed. (Both companies continue investing in their products: Peloton just announced a smart rower, in addition to its smart treadmill and strength classes; and Lululemon is rolling out membership plans that include workouts.)

The most durable part of the Fitness+ strategy is its focus on beginners. That’s not to say its workouts are so easy, they’re beneath the very fit (its high-intensity interval sessions are demonically hard). But it has tutorials specifically for fitness newcomers. Workouts come as short as five minutes, and all offer low-impact modifications. Its 26 trainers have a range of ages and body types. And they use careful, gentle language that never touches on the punishing topic of weight loss – for example, a strength class is taught “not through the lens of vanity, but through the lens of functional movement”, says Blahnik.

“We want Fitness+ to be the most inclusive and welcoming fitness service ever,” he explains. “We wanted trainers who were experts at their craft, but had a heart for the beginner and weren’t just interested in training people that were already really fit.”

This is a smart play because the fitness industry is still perceived as closed to beginners – many of whom are uncomfortable entering traditional gyms. If Fitness+ can corner the newbie market, Apple will rake in even more money.

Perhaps the biggest challenge for Fitness+ is product awareness – I know plenty of Apple Watch wearers who don’t know it provides workouts. Not that low awareness is hurting Apple: the company recently announced record-high income from its services (in addition to Fitness+, they include Apple TV+, News+ and Music), which it can put towards crafting more wellness features to supplement the Watch.

“From the very beginning with the Watch, it’s always been our philosophy that fitness should be in service of the broader health story in your life,” says Blahnik. Williams adds that Fitness+ is ultimately built in pursuit of a worthy goal: “Helping people be more active and live a healthy life.” And helping Apple earn squillions more by doing so.

Sam Downing travelled to the Apple Fitness+ studio in Los Angeles as a guest of Apple.