Carter Abdallah was a runner—and he looked it. In high school, the now 19-year-old student from Atlanta, Georgia, broke his arm. Looking in the mirror, he decided he wanted to bulk up.

“I’d always been the skinny nice guy, but never turned heads,” he says. “I wanted that to change, and in my sophomore year, gaining access to my school weight room was all the opportunity I needed.”

He spent the first year figuring out all the machines, teaching himself through online forums and YouTube videos. He took the workouts from his favorite YouTubers into the gym, seeing what might work for him. (Figuring out his own regimen was an inexpensive alternative to hiring a personal trainer as a high schooler.) “I gained 20 pounds my first year,” he says. “Not all of it was muscle, but a significant portion was.”

After that first year, he worried that he’d exhausted all his “noobie gains.” He’d plateaued in nearly all of his lifts, but still wanted to see more visible changes. I knew that the best times were ahead,” he says, “but it required a lot of self discipline to re-educate myself and recommit myself to the gym to break through the plateau.”

So he kept at it. Into his second year of lifting regularly, Abdallah still wasn’t doing much with his diet—he was “eating almost anything and everything I could get my hands on,” he says. He decided he wanted to see his abs, which meant cutting out “trash food” such as Dr. Pepper, which he swapped for unsweetened ice tea. With that kind of small change, he was able to reveal his abs; today his diet is mostly chicken, lean red meats, and eggs. He gets his carbs from rice and vegetables, and isn’t above the occasional cheat day.

In three and a half years, he’s gone from that skinny, 165-pound guy he used to see in the mirror to 195-pounds of lean, toned 19 year-old. (He says he hasn’t gone a full week without lifting since August, 2015.) His shoulders and chest were bigger; feeling more confident, he noticed that he got more attention from women, as well. He’s still getting used to the feeling of taking up more space than before. “It was a foreign but empowering feeling, becoming a ‘big guy,’” he says. 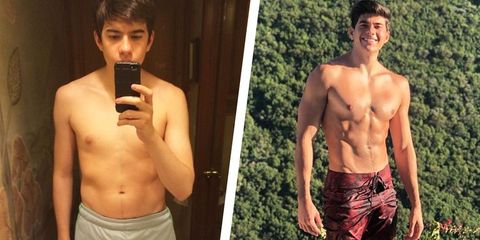 For Abdallah, the mental transformation he’s undergone is even more important than the physical one. “I became a different person with the confidence I gained from putting on the muscle,” he says. There was the confidence boost and the increased attention from women, but he also felt more comfortable in his own body—like he owned it. He found himself better at public speaking, too.

For anyone looking to follow in his footsteps, he says it’s all about consistency. (He now tracks his progress on Instagram, where he hopes to grow his following and help others get in shape.) “It’s difficult at first because it seems to take up a significant portion of time,” he says, “which it does, but once it becomes part of your daily routine, it’s more difficult to skip out on the gym than it is to go.” From there, you’re well on your way to owning your body.