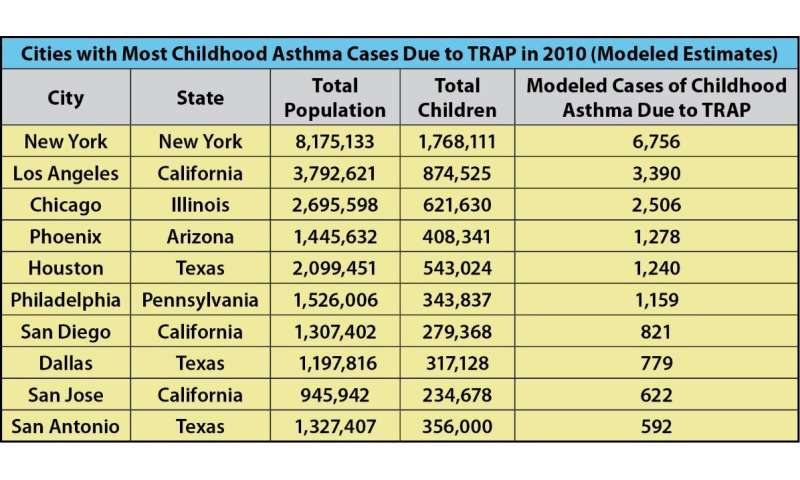 A team of air quality and health researchers led by the Texas A&M Transportation Institute (TTI) have created a first-of-its-kind, county-by-county interactive heat map and city-by-city table detailing the distribution of childhood asthma due to traffic-related air pollution across the United States. One of the principal findings is that asthma cases attributable to traffic-related air pollution dramatically decreased over a 10-year period.

A research paper, “Traffic Related Air Pollution and the Burden of Childhood Asthma in the Contiguous United States in 2000 and 2010,” detailing the findings has been accepted for publication in the peer-reviewed journal Environment International.

“This is the first time a study has estimated the national childhood asthma incidents attributable to different ambient air pollutants,” states Principal Investigator Haneen Khreis, assistant research scientist with TTI’s Center for Advancing Research in Transportation Emissions, Energy and Health (CARTEEH). “Based on our modeling estimates, childhood asthma cases attributable to traffic-related air pollution (nitrogen dioxide, or NO2) decreased, on average, by 33 percent between 2000 and 2010. This is a win for public health.”

Khreis and her team created an interactive heat map showing the impact NO2 had on childhood asthma across the country during the years 2000 and 2010. Every U.S. county is represented, and users can hover over a county to see the findings for that county. Also, a table of the largest 498 cities across the country with detailed information for each year is presented. | Access the Heat Map and Table 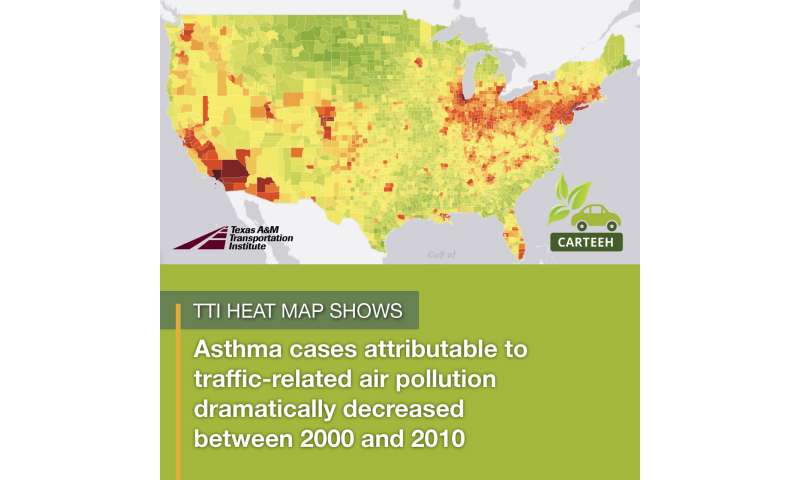 “The decline in NO2-related asthma cases is due to multiple factors, including more fuel-efficient vehicles,” says TTI’s Raed Alotaibi, a graduate assistant researcher and a medical doctor with CARTEEH. “Whatever the reason(s) for the decline, this is good news because asthma is one of the leading chronic airway diseases among children.”

TTI estimates there were more than 140,000 asthma cases due to TRAP in the United States in 2010. More than 80 percent of children with TRAP-induced asthma live in urban areas. Low income households are especially vulnerable.

The heat map can help better inform air quality policy makers, transportation agencies, medical associations and anyone else interested in learning more about the burden of childhood asthma due to air pollution. The research team is currently refining this analysis by using state-specific health data from surveys by the Centers for Disease Control and Prevention.