Tuberculosis rates in England are the lowest EVER

Tuberculosis cases in England fall to the lowest level since records began in the 1960s, official data shows

The number of cases of tuberculosis cases being diagnosed in England is lower than ever, figures revealed today.

Almost half as many cases of the deadly lung infection were treated last year than in 2011, according to Public Health England statistics.

While tuberculosis, known as TB, is still one of the world’s biggest killers, it has been reduced to fewer than 5,000 cases per year in England. 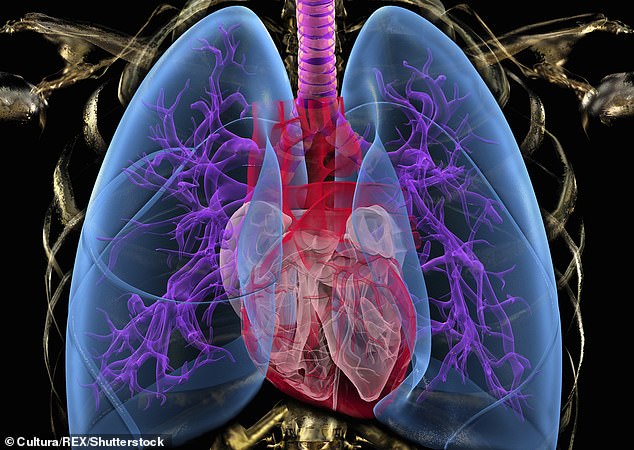 Tuberculosis is a bacterial infection which most commonly infects the lungs and, if left untreated, can cause the tissue to break down and fill up with fluid (stock image)

Public Health England is trying to eliminate the disease completely by 2025.

However, the government body said poorer people are still more likely to contract the illness and more needs to be done to improve their health.

The most deprived people in the country are seven times more likely to catch it than the least deprived, and people born outside the UK are also at higher risk.

Government public health minister, Steve Brine, said: ‘We should be proud that TB rates are now at the lowest levels ever recorded in this country – a true testament to the hard work of the NHS and public health staff.

‘There is still more to do – people in deprived communities are still disproportionately more likely to contract this disease, so we must do more to tackle this injustice by raising awareness and ensuring early diagnosis and treatment.’

Tuberculosis (TB) is a bacterial infection spread between people by coughing and sneezing.

The infection usually affects the lungs but the bacteria can cause problems in any part of the body, including the abdomen, glands, bones and the nervous system.

In healthy people the bacteria are often killed by the immune system or at least prevented from spreading, but in some cases the bacteria can take hold and cause a more serious infection.

TB infection causes symptoms like fever, coughing, night sweats, weight loss, tiredness and fatigue, a loss of appetite and swellings in the neck.

If the immune system fails to contain TB bacteria the infection can take weeks or months to take hold and produce symptoms, and if it is left untreated it can be fatal.

TB is a common cause of death among people with HIV, because it is particularly dangerous for people with weakened immune systems – people with HIV are thought to be up to 27 times more likely to get the disease.

With treatment, TB can almost always be cured with antibiotics and people tend to stop being contagious after about three weeks of therapy.

TB is most common in less developed countries in sub-saharan and west Africa, southeast Asia, Russia, China and South America.

Worldwide, 10million people fell ill with tuberculosis in 2017 and 1.6m died from the disease, according to the World Health Organization.

The infection is spread by the coughs and sneezes of patients and most often affects the lungs, although it can get into other parts of the body.

In the lungs the infectin causes coughs, fevers, night sweats and weight loss, and it can kill by destroying the lungs from the inside and causing them to bleed and fill with liquid.

It is particularly dangerous for people with HIV and those without access to good medical care.

South and east Asian countries including China, Indonesia, India and Pakistan tend to be worst affected.

In England, the infection can usually be cured with antibiotics.

Alcohol or drug abuse, living in poor quality housing, and having a weakened immune system may all increase the risk of someone developing the disease.

English health authorities have been working to clamp down on the illness by raising awareness of it, improving how it’s monitored, and taking extra steps to make sure patients complete their treatment, which can take a long time.

They also test people travelling home from countries with high TB rates, because people can carry the bacteria without showing symptoms but still pass it on.

PHE’s head of TB strategy, Dr Sarah Anderson added: ‘It is hugely encouraging to see a continued decline in TB cases in England, which shows that the interventions we are putting in place are having an impact.

‘However, TB still affects nearly 5,000 people a year in the UK and many people are simply unaware of the symptoms and impact of the disease.

‘We are calling for anyone who has possible TB symptoms, or thinks they may be at risk of having latent TB, to speak to their healthcare professional to get diagnosed and treated as soon as possible, to minimise the chance of long-term ill health and onward transmission.’