The plight of girls who have a male twin: Report suggests they earn less, are less likely to marry and are less fertile due to testosterone exposure in the womb

Girls with fraternal male twins may earn less and be less likely to thrive in society, new research suggests.

Researchers in Norway and at Northwestern University posit that exposure to their brother’s testosterone in the womb may damage the female twin, resulting in poorer cognitive functioning and fertility.

Though studies on humans vary, it may be that this testosterone exposure alters the way females develop, leading to more masculine traits that could explain the lower probability that these girls find partners and marry later in life.

Understanding these outcomes is more important now than ever, the researchers say, as IVF has let to a near two-fold increase in the number of twins born annually. 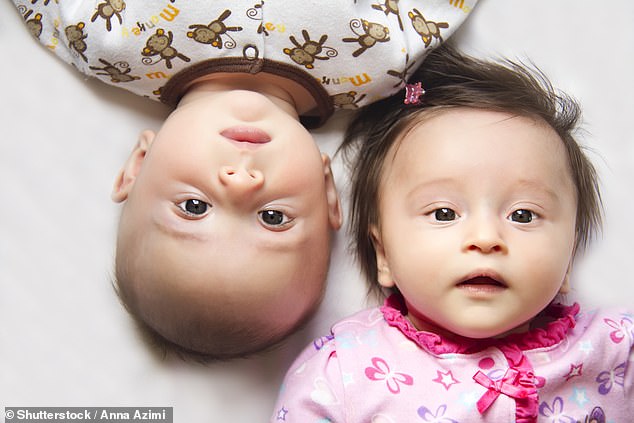 Developing in a womb shared with a male may mean that testosterone exposure leads female fraternal twins to be less fertile, earn less and be more at risk of dropping out of school

The disparities between any man and any woman in the US (and abroad) are clear and undeniable.

Women are now more likely to get a college degree but have poorer access to healthcare.

But twins share a rare influence on one another, beginning in the womb – and it’s becoming increasingly clear that even between twins, the female may be at a disadvantage.

Certain patterns and trends in male-female pairs have long been observed, including some worrying possible disadvantages for the girl half of the pair.

A number of studies have tried to examine how sharing a womb might affect twins, especially if they are of different sexes.

Though unproven, the ‘twin testosterone-transfer hypothesis’ suggests that the roots these divergent paths might be traced back to male hormones that a female twin is exposed to when developing alongside a boy.

Fetuses develop in an amniotic sac swirling with nutrients, antibodies and hormones and get their blood supply from their mother – and twin fetuses share this fluid and blood supply with one another, too.

The mother’s levels of both estrogen and testosterone – the female and male sex hormones, respectively – increase steadily over the course of pregnancy, whether she is carrying a boy, girl, both or multiples.

But the concentration of those hormones does differ in the amniotic fluid.

So, the theory is that, in order to support the development the boy she’s sharing a womb with, a developing twin girl’s amniotic fluid and bloodstream may get flushed with more male hormone than it would have otherwise.

Prior studies have noted this, but hardly been large enough to prove the effects.  Other research has dismissed this theory, suggesting instead that the later-in-life differences seen in girls were just a product of their being socialized differently because they were raised in tandem with a boy the same age.

But the new study, from Northwestern University and the Norwegian School of Economics, is the largest to-date to look at everything from testosterone levels in the womb to outcomes over 30 years of the lives of twin pairs of two girls compared to twin pairs of one boy and one girl.

Published in the journal Proceedings of the National Academy of Sciences, the study also compared these data to information on female twins whose male or female siblings had died shortly after birth, so the researchers could see how the way these children were raised was different from how testosterone in utero effected them.

Compared to the other groups of twins, female twins who developed alongside a boy in the womb had several disadvantages later in life.

And they earned less than even girl twins whose sisters were girls too, but 8.6 percent.

These differences remained even if a girl’s twin brother had died just after birth, suggesting that it was the testosterone exposures, not the way she was raised, that explained the differences between her and other twin girls.

Exposure to more estrogen in the womb did not appear to be linked to any significant differences for boy twins.

‘This is a story about the biology of sex differences,’ said co-author David Figlio, Dean of Northwestern’s School of Education and Social Policy.

‘We are not showing that exposed females are necessarily more ‘male-like,’ but our findings are consistent with the idea that passive exposure to prenatal testosterone changes women’s education, labor market, and fertility outcomes.’

Although they note the possibility that this pattern will only become more common as IVF is on the rise, leading to a doubling of twinning, the researchers also said their findings shouldn’t be cause for alarm.

‘While we found moderate effects at the national level, these results reflect mean differences, not everyone will be affected in the same way, and some female twins may not be effected at all,’ said study co-author Krzyzstof Karbownik of Emory University said.

‘And, these effects are highly unlikely to result from any individual fertility decision made by a woman or couple, given that twins are a small subset of births and male-female twin pairs even rarer yet.

‘We certainly do not advocate against delayed reproduction or the use of IVF, which are complex decisions made by individuals balancing a range of personal factors.’