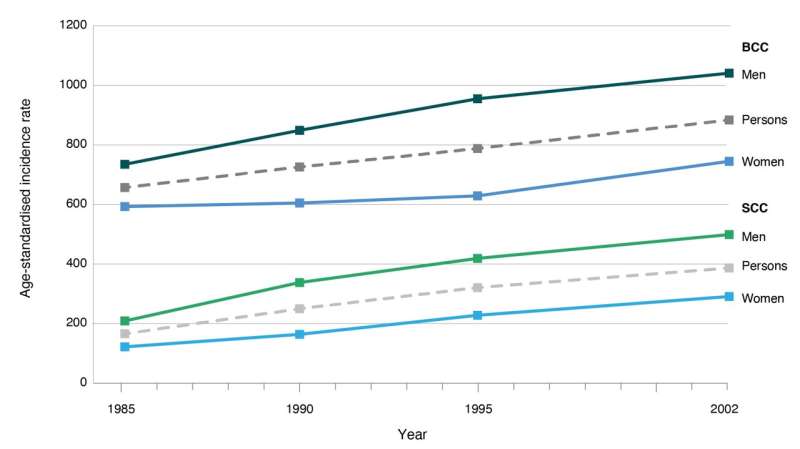 More than two thirds of Australians will be treated for the most common skin cancers in their lifetime, with rates increasing by up to 6% a year over the past three decades, according to new research published today.

The paper, which presents the latest evidence on the incidence of basal cell carcinomas (BCCs) and squamous cell carcinomas (SCCs)—collectively known as keratinocyte cancers—is published in Public Health Research & Practice, a peer-reviewed journal of the Sax Institute.

The authors, led by Associate Professor Catherine Olsen of the QIMR Berghofer Medical Research Institute, calculated the lifetime risk of keratinocyte cancer and trends in treatment rates in Australia, using the latest available data. They found that 69% of Australians (73% of men and 65% of women) will have at least one excision for a histologically confirmed keratinocyte cancer in their lifetime.

Keratinocyte cancers, also known as non-melanoma skin cancers, are the most common cancers in Australia. BCCs grow slowly in the lower levels of the skin’s epidermis and make up at least two-thirds of all skin cancers, according to Cancer Council Australia. About one-third of skin cancers are SCCs, which grow rapidly in the upper layer of the epidermis. If left untreated these cancers can damage nerves and nearby tissue and, in the case of SCCs, spread to other parts of the body with potentially lethal consequences. More than 500 Australians die from SCCs every year.

The paper’s authors found that not only is the incidence of keratinocyte cancer in Australia very high, it has been increasing over the past three decades, at a rate of between 2 and 6% per year, mostly affecting older age groups.

“This high and increasing burden of skin cancer emphasizes the need for continued investment in skin cancer education and prevention,” the authors write.

They say measures to address the growing problem should include support for national mass-media prevention campaigns, a strengthening of regulatory measures to protect children and workers from the harms of overexposure to sunlight and more provision of shade in public spaces.

The paper is published in a special issue of Public Health Research & Practice that focuses on skin cancer prevention and early detection. The issue was supported by and developed in partnership with Cancer Council, Australian Radiation Protection and Nuclear Safety Agency, the Australasian College of Dermatologists and the Australian Skin and the Skin Cancer Research Centre.

Another highlight in this issue is a paper on the early detection and screening of skin cancers. The authors, led by Professor Monika Janda of the University of Queensland, highlight concerns around the current unstructured approach to early detection through opportunistic screening. They discuss new technologies for screening and highlight promising findings from a program to train GPs in the use of dermoscopy.

“The path to sustained investment is not challenged by industry, but seemingly our own complacency,” they write.