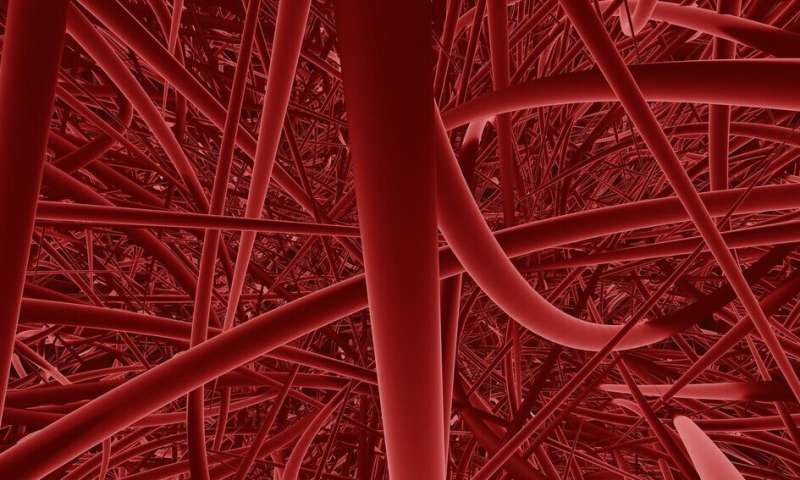 Insufficient oxygen to an area like the heart or legs, called hypoxia, is a cue to our bodies to make more blood vessels, and scientists have found some unusual partners are key to making that happen.

The endothelial cells that line existing blood vessels are essential to making new blood vessels, and they’ve found that two receptors on the surface of those cells come together then dive inside to enable the new growth, called angiogenesis, the Medical College of Georgia scientists report in the journal Nature Cell Biology.

As the name implies, vascular endothelial growth factor receptor 2, or VEGFR2, typically binds to VEGF, a signaling protein that enables new blood vessel growth, to go inside the cells. CTR1 enables copper, an essential mineral key to many important body functions, including angiogenesis, to also go inside.

Corresponding authors Dr. Masuko Ushio-Fukai, vascular biologist, and Dr. Tohru Fukai, vascular biologist and cardiologist, say that in the face of hypoxia, VEGF is naturally stimulated outside the cell, then in turn activates NADPH oxidase, a family of enzymes that generate reactive oxygen species, or ROS—in this case the good kind that enables cell signaling.

They’ve shown for the first time the step that happens next: ROS then quickly modifies CTR1, which prompts the VEGF receptor and this copper transporter to bind to each other on the cell surface and move inside the cell so the sustained VEGFR2 signaling that is essential to new blood vessel development happens.

When they knocked down the copper transporter, angiogenesis was severely impaired, Fukai says. They’ve also used the gene editing ability of CRISPR-Cas9 to make CTR1 unmodifiable and angiogenesis was again significantly reduced.

The scientists worked in models of blood vessel development in the highly vascularized retina and in peripheral artery disease in a limb.

While it’s long established that VEGF binding to its receptor causes angiogenesis, this is the first evidence of this binding of receptors for copper and VEGF that appears to be an early and important connection.

Their findings also make CTR1 a logical therapeutic target when more blood vessels are needed in the face of problems like ischemic heart disease, and potentially when the process becomes destructive in conditions like cancer and diabetic retinopathy, the scientists in MCG’s Vascular Biology Center say.

Ushio-Fukai’s lab has shown that treatment of endothelial cells with VEGF increases ROS levels in those cells. Her lab subsequently showed that ROS, a byproduct of our oxygen use, is very important for promoting VEGF-induced angiogenesis. Fukai’s lab has focused on the impact copper metabolism has on the body, including its transporter CTR1.

Now they’ve connected the dots between them. “Once ROS is generated, it modifies CTR1, which changes its function to become a binding partner for VEGFR2,” she says.

In this scenario at least, CTR1 does not take copper with it when it moves inside endothelial cells but in other parallel action it still does, which is another boon to angiogenesis.

Once the connections start generating new blood vessels, ROS levels go down and the CTR1 is free to return to the cell surface where it resumes its normal job of transporting copper inside, Ushio-Fukai says.

They also have evidence there is always some CTR1 left on the endothelial cell surface, which can continue to do its usual job of enabling copper to be used, in this case to also aid angiogenesis.

They also have indications that too much copper can be destructive. The Fukais have seen copper pile up inside cells in diabetes, where it instead impairs the ability to help make the healthy new blood vessels patients may need. They say another copper transporter, ATP7A, whose primary job is regulating copper levels inside cells, is likely a good treatment target in diabetes, where ATP7A levels are uncharacteristically low.

Copper is an essential trace mineral we need to consume in foods like nuts and whole grains which also is important to fundamentals like making red blood cells that carry oxygen. There is a lot of CTR1 in the gut to enable copper’s uptake and use throughout the body.

While VEGF and endothelial cells are both essential to angiogenesis, it’s other cell types, like platelets, immune cells called macrophages and even tumor cells that make VEGF.