Using ketamine to find an undiscovered pathway in depression 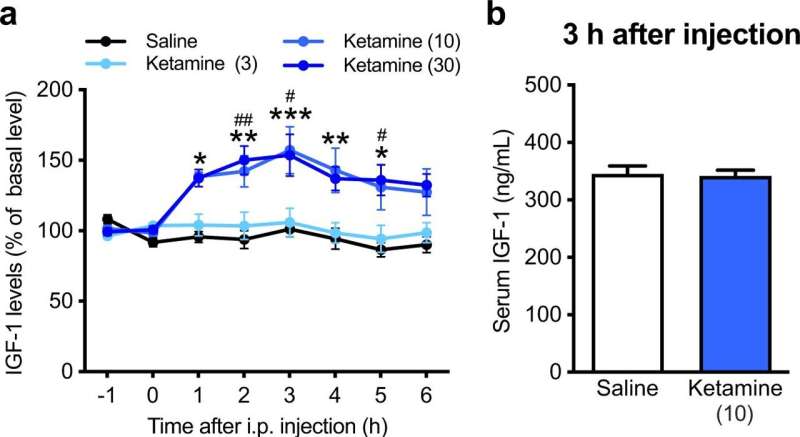 For the 280 million people suffering from depression globally, relief cannot come fast enough. Monoaminergic antidepressants, including selective serotonin reuptake inhibitors (SSRIs) take weeks to months to take effect and do not work for more than one in three patients. For patients diagnosed with treatment-resistant depression, or in immediate crisis, access to safe, effective, rapid-acting antidepressants can improve lives and decrease suicide.

One current possibility being investigated is ketamine, which can improve depression, even in treatment-resistant patients. Ketamine is an anesthetic used for over 50 years, but it has serious side-effects, including dependence, hallucinations, and delusions. So, while preclinical studies have shown that a single dose of ketamine can have beneficial long-term effects on mental health and is only used to treat depression as a last resort. There are good reasons to be cautious; in addition to the side-effects, the way ketamine alters brain chemistry is not fully understood. If the biological mechanisms in the brain that ketamine influences are discovered, new drugs could be developed to target the beneficial antidepressant effect specifically. 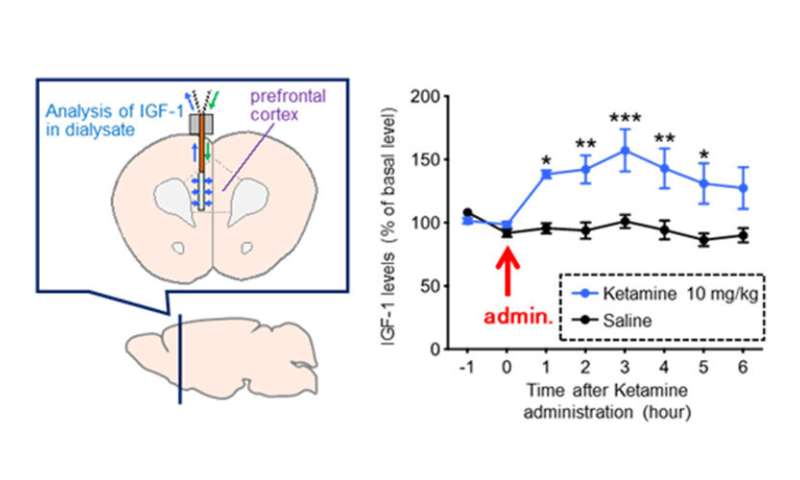 The study led by Professor Kondo demonstrated ketamine treatment led to an increase in insulin-like growth factor 1 (IGF-1), a known antidepressant brain molecule. However, they did not know if this was linked to previously discovered ketamine related antidepressant molecules like brain-derived neutrophic factor (BDNF). They confirmed IGF-1 produced an antidepressant effect then demonstrated that they could switch it off by blocking it with an IGF-1 neutralizing antibody.

After demonstrating they could switch off IGF-1, the researchers followed up with a separate experiment. Previous studies have shown that ketamine increases BDNF, a protein that promotes nerve growth, so the researchers wanted to check if IGF-1 and BDNF were working together or separately. They tested whether IGF-1 and BDNF neutralizing antibodies blocked the other proteins antidepressant effect, they did not, leading the researchers to conclude that IGF-1 and BDNF work through their own independent pathways. 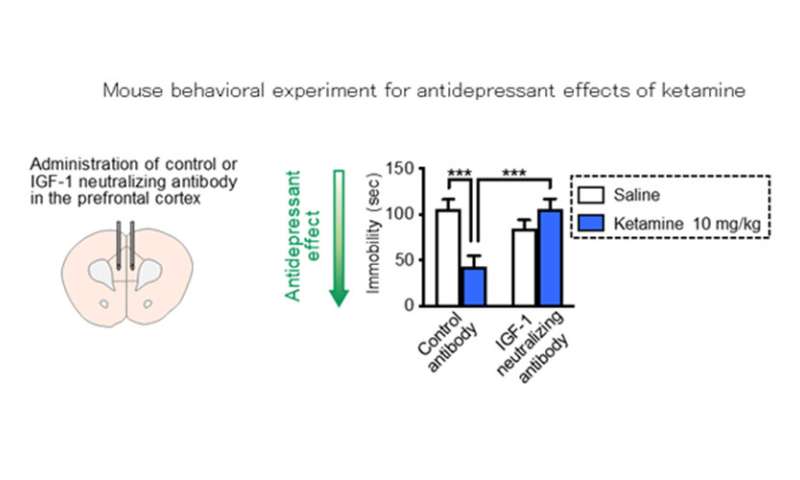 This discovery indicates that ketamine uses a previously unknown pathway that produces an antidepressant effect. The researchers hypothesized that the single dose of ketamine increases the level of IGF-1 in the brain, persistently changing prefrontal cortex nerves and causing them to increase their number of stable connections. The link between ketamine and IGF-1 presents a brand-new direction for future studies investigating antidepressants that target IGF-1 directly.