What the War in Ukraine Means for Your Financial Picture

Russia’s invasion of Ukraine has had worldwide repercussions. In addition to the massive humanitarian toll, the offensive has roiled financial markets across the globe. 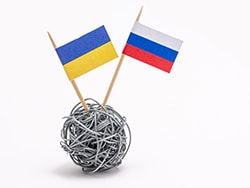 How will this worldwide turmoil affect your finances? Will it affect your stocks, investments, interest rates, purchases?

The spike in oil prices and continued geopolitical uncertainty caused the S&P 500 index to drop more than 10% in February. The market has rallied to recover most of its losses, but the gyrations since the invasion began come on top of heightened market volatility since the start of the year.

“The Russia-Ukraine situation has added a new level of uncertainty in the markets,” says Amy Guerich, a senior partner at Stepp & Rothwell, Inc, a financial planning firm based in Overland Park, Kansas, whose clientele is about one third physicians. “We have seen a decline in the stock and bond markets that reflects that uncertainty.”

Commodities (raw products, such as oil, gold, and coffee) — typically viewed as a hedge against inflation and a safer investment in times of turbulence — have spiked. Aside from the run-up in oil prices, the material price index, which includes 10 commodity components — including lumber, rubber, and pulp — spiked in mid-March to levels nearly 12% higher than their 2011 record, according to S&P Global.

The collapse of Russia’s ruble has also sparked concerns that the country could default on its government debt, although Russia made the $117 million payments due on March 16.

Inflation is a concern for many Americans. At 7.9%, inflation, has hit a 40-year high in the United States (owing to the war in Ukraine and other macroeconomic factors). Because of inflation’s impact on consumers, whose spending represents the primary drive of US economic growth, the US Federal Reserve has begun to tighten monetary policy with interest rate hikes. The agency boosted interest rates by a quarter of a percent in March and is expected to continue with small rate hikes for the rest of the year.

While higher interest rates can make borrowing via mortgages and car loans more expensive, increased interest rates for savings accounts and certificates of deposit can be a boon to consumers. However, inflation could dampen that benefit.

Many investors have become more conservative in their investing approach. Three quarters of active investors surveyed by Fidelity in February said they prefer long-term gains over short-term gains when investing ― meaning that they would rather buy stocks to hold onto rather than make quick purchases and sales. And 60% would rather pursue low-risk, low-reward investments over risky investments ― meaning stocks that are less likely to increase in value but are also less likely to drop precipitously.

About half of retail investors told the American Association of Individual Investors in mid-March that they were feeling bearish regarding the direction of the markets. Given that landscape, here’s how to shield your portfolio from the impact of the war.

While the war in Ukraine has broad global financial implications, experts don’t expect it to have a long-term effect on portfolios. A January report from LPL Financial that assessed the impact of 22 major geopolitical events over the past 80 years found that the average stock decline in the S&P 500 was less than 5%, and it bottomed out in less than a month.

“Whether you’re looking at the war in Ukraine or inflation, there’s always going to be another global crisis or economic issue,” says Christopher Stappas, a private wealth advisor with Summit Financial. “This isn’t the first one, and it’s not going to be the last one.”

Long-term investors should have a diversified portfolio with an asset allocation that reflects their financial situation and goals. By diversifying across asset classes, regions, and sectors, you minimize the impact of a downturn in one area of the market. If the goals for which you are investing are decades away, short-term events like a war, a pandemic, or even a market downturn should not affect the plan.

“Historically, when you look at these types of conflicts, the market impact is fairly short-lived,” says Garrett Melson, a portfolio strategist with Natixis Investment Managers Solutions. “Investors have knee-jerk reactions and move into risk-off mode, but when it becomes apparent that the economic impact is fairly limited outside of the nations that are involved, the markets recover fairly quickly. That seems to be the playbook we’re seeing here.”

That said, this might be an opportunity to reexamine your long-term plan to see whether your current portfolio adheres to it. If you haven’t reallocated recently, you may be overinvested in the stock market.

“This is a great moment to look at your portfolio, and if you’re 65 and you’re 95% in stocks, it’s as good a time as any to start dialing back your investments,” Greenwald says.

If you have shorter-term needs, such as pending retirement or a child’s tuition payment, you should have the funds you might need over the next year or two in cash. That way, you can cover your expenses without having to worry about locking in losses if the market is down.

“We recommend keeping enough cash on hand so you don’t have to worry about uncertainty in the market or about liquidating securities when things are down,” Guerich says.

Get Used to Volatility

In the near term, at least, experts say markets will likely continue to whipsaw in response to war news and expectations regarding inflation and interest rates. While markets were relatively calm over the past decade (notwithstanding the short bear market at the onset of the COVID pandemic), stock market volatility is normal.

But seeing a steep decline in the value of your portfolio can prompt a strong desire to pull out or make knee-jerk changes to protect what’s left. Resist the urge; selling stocks while they’re down not only locks in losses but also means you must figure out the best time to get back into the market.

If watching your nest egg take a beating is painful for you, stop watching. If you’re properly allocated and don’t plan to make any short-term changes, there’s no reason to check your balance on a daily or even weekly basis.

“Stick to the plan and keep your eye on the ball,” Guerich says. “That ball is your financial independence.”

Keep in mind that while market volatility can feel unnerving, it also represents an opportunity for long-term investors to purchase stocks at a discount. For investors with cash on the sidelines, this may be an opportunity to put that money to work while prices are down.

It’s also a great time to be an investor who uses dollar-cost averaging, meaning you contribute a set amount at regular intervals, such as via 401(k) contributions. Dollar-cost averaging means you’re guaranteed to buy stocks when they’re at their lowest price, and those purchases will offset the higher purchasing costs when values begin rising.

“When stocks are down, that’s also an opportunity for tax-loss harvesting,” Greenwald says. “We just haven’t had this kind of market for so long that people are out of practice in what to do.”

The one area of your portfolio that might require a second look in today’s environment is your fixed-income allocation. While fixed income is a necessary ballast to stock markets — especially during times of volatility — rising interest rates push down bond yields. That means fixed-income returns could remain depressed for the foreseeable future.

For older investors who need to maintain a fixed-income allocation, one way to minimize the impact of rising rates could be to go with shorter-duration products. That way, as interest rates start to rise, you can cycle into newer fixed-income investments that take advantage of the higher rates.

Other advisors suggest that introducing alternative fixed-income investments might also offer those investors a path to yield.

Stappas says his firm is helping some clients shift their fixed-income portfolios into real estate and private credit investments. However, the higher yields in fixed-income alternatives typically require either taking on more risk or giving up some liquidity. In both cases, it may be helpful to talk to an investment advisor to make sure that you understand the trade-offs involved with such investments and whether they make sense for your bigger financial picture.

Stappas says he’s also talking to some clients about rounding out their portfolio with permanent, whole-life insurance.

“An advisor will have the time and resources to do the proper due diligence and guide clients through these alternative strategies,” he says. “There are hundreds of vehicles out there in the marketplace, and it takes a lot to do due diligence.”