What your brain’s noise tells about your authentic self 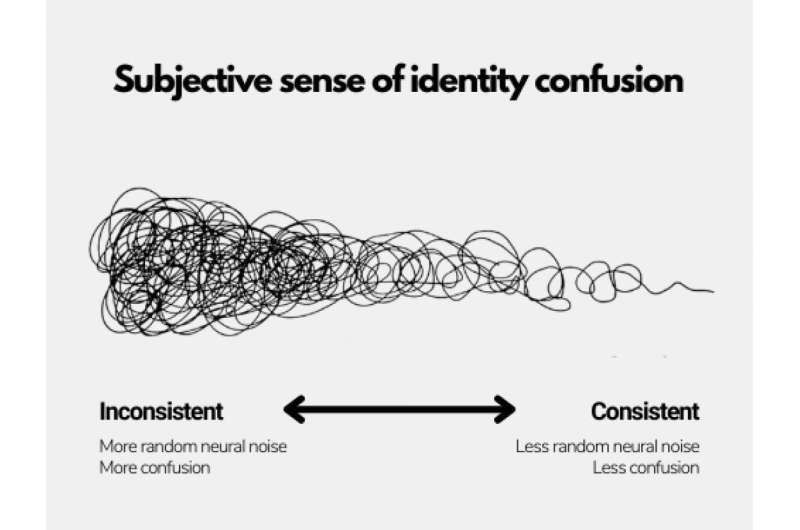 Wrestling with the question of “Who am I?” during an inner dialog but couldn’t seem to reach an answer? Your brain’s background noise may be disrupting the long memory signals communicated by your neurons’ electrical chatter.

Hiroshima University’s Professor Kazumi Sugimura and Associate Professor Takashi Nakao led a team of researchers to listen to the hum of neurons at the frontocentral lobe as people rest and find out what it tells about their subjective sense of identity.

A signal exhibits long-range temporal correlation (LRTC) or long memory if it remembers past fluctuation patterns. In the brain, LRTC is thought to reflect our capacity to take in fresh information and relate it to what we already know.

At a state of relaxation when our minds are prone to wander between events of the past and activities in the future, LRTC is associated with how we respond to situations based on our internal criteria of “What am I like?” But its links with our subjective sense of identity have yet to be explored.

“The subjective sense of consistent self across time has long been examined in developmental and clinical psychology through the concept of identity,” Nakao, who is affiliated with HU’s Graduate School of Humanities and Social Sciences and teaches undergraduate and graduate psychology courses at the university, said.

LRTC’s role in the consistency of self

Our neurons’ electrical chatter is made up of excitations and inhibitions. LRTC emerges from neural networks with balanced excitatory and inhibitory connectivity.

This chatter of excitation and inhibition produces brainwaves which, depending on their excitement level, are associated with our different mental states. LRTC has been observed in the brain’s alpha, theta, and beta wave activity.

Although not the focus of their study, the researchers discovered that subjects who tested well in having a strong sense of who they are exhibited theta band (4 and 8 Hz) long memory signals with low noise contamination in their frontal lobe.

“Thus, the temporal dynamics reflected in the LRTC of intrinsic brain activity likely have a crucial role in the consistency of self, including the subjective level, namely, a sense of identity,” the researchers said in their study published in the journal Scientific Reports last January.

The researchers said their findings add to the evidence that long memory signals of the resting-state brain might serve as a noise suppression mechanism at the psychological level.

Nakao said his goal as a psychophysiologist is to uncover the function of the self.

“Based on brain science evidence, I would like to accumulate knowledge related to why people are bothered about themselves,” he said.

“We believe such knowledge will help those struggling with questions such as “Who am I?” and “Why do I think so much about myself?” to see their situation objectively.”