WHO declares gene editing babies is ‘irresponsible’ – but stops short of a ban: Officials call instead for global database to monitor scientists using the technique after Chinese doctor stunned the world by editing HIV out of twin girls

A panel convened by the World Health Organization said it would be ‘irresponsible’ for scientists to use gene editing for reproductive purposes, but stopped short of calling for a ban.

The experts also called for the UN health agency to create a database of scientists working on gene editing.

The recommendation was announced Tuesday after a two-day meeting in Geneva to examine the scientific, ethical, social and legal challenges of such research.

‘At this time, it is irresponsible for anyone to proceed’ with making gene-edited babies since DNA changes could be passed down to future generations, the experts said in a statement. 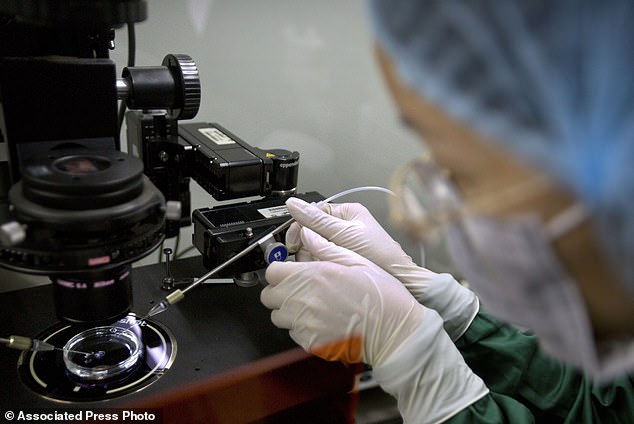 On Tuesday, an expert committee convened by the World Health Organization called for the UN health agency to create a global registry of scientists working on gene editing

Last year, Chinese researcher He Jiankui rocked the scientific community with his announcement that he helped make the world’s first gene-edited babies, altering the DNA of twin girls to try to make them resistant to HIV, the virus that causes AIDS.

WHO’s announcement comes after an international group of scientists and ethicists called for a temporary ban on gene-edited babies in the journal Nature last week.

Margaret Ann Hamburg, co-chair of the WHO panel, and her colleagues declined to call for a similar prohibition.

‘I don’t think a vague moratorium is the answer to what needs to be done,’ she said. ‘What we’re trying to do is to look at the broader picture.’

She said the experts envisioned a WHO-directed database where journal publishers and funders of gene editing research would require scientists to sign up – but acknowledged they had not yet worked out how to reprimand any scientists who refused to register.

Earlier this year, Chinese investigators said He had dodged supervision of his work and broke research norms because he wanted to be famous. The report said He could face consequences, although it didn’t specify which regulations he may have violated.

WHO’s director-general Tedros Adhanom Ghebreyesus announced the formation of the panel in early December after He revealed his experiment.

‘We have to be very, very careful’ about how to proceed, Tedros said at the time. ‘We have a big part of our population who say, ‘Don’t touch.”

Gene editing is intended as a more precise way to do gene therapy. Trying it in adults to treat diseases is not controversial and the DNA changes do not pass to future generations. But most scientists think gene editing to make babies is too risky to be tried at the moment because of the danger of damaging other genes and because unknown DNA alterations could be passed on.