Why reading maps is still wrecking our holidays

Those people who look at a map and then instantly deduce both their whereabouts on the map and the quickest way to get to their destination are very impressive.

You still see some of them on holidays, paper maps in hand, striding forth. Not for them to be pinned down by Google Maps. Excuse the pun.

That person with the sense of place is not me. I have always had the worst possible sense of direction. Decades ago, a friend recommended I turn the map to make it more likely to reflect the direction I wanted to head in. Instead, it was utterly confusing and made no difference. The map books we had as kids, the UBDs, the Gregory’s, were as inscrutable as calculus, made worse because I needed them. 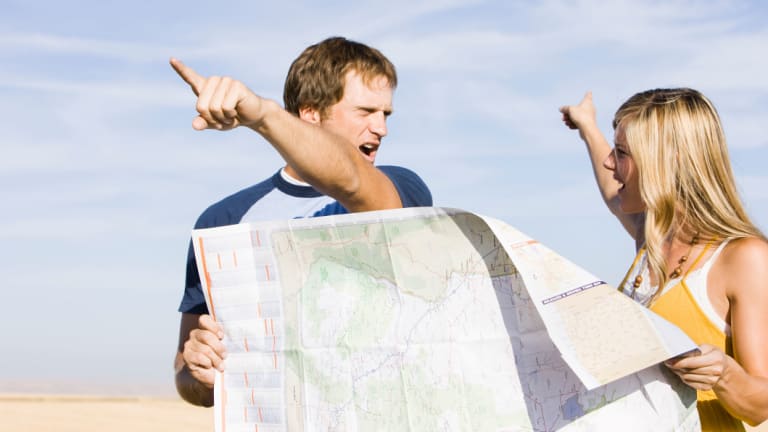 Google Maps may not have saved lives but it definitely saved relationships.

That flaw could ruin any holiday. And it certainly had a good go at ruining a few days of mine.

But the introduction of map apps changed the direction of my life. I went from being geographically illiterate to being able to get myself around, no problem, from walking several blocks in the wrong direction to walking just a few metres in the wrong direction. If I needed reassurance, I’d just ask Siri and there she would be, mispronouncing the name of a nearby suburb – but that didn't matter. I knew what she meant.

It also meant that my beloved, who could find home in a dust storm, could trust me to navigate us to various spots – not something he had ever been able to do before. Those terrible holiday arguments about which fork to take on that unmarked road have just about disappeared. Google Maps may not have saved lives in the same way that Ian Frazer has saved lives or Jonas Salk saved lives – but it certainly has saved relationships.

And more than any other app, except perhaps our banking apps, it’s the one we use when we go on holidays. We are more likely to ask each other if the dot is happy, or to ask what it’s doing, than to complain about the hopeless directions I provided which ended up with us down a tiny marshy lane in the backroads of Victoria.

But I've developed a few concerns. One, that Blue Boy, our affectionate name for the travelling dot, has not been as reliable of late, sending us both round in circles. Whereas once we could be certain BB was always right, now we ask each other: “Is the dot happy?”. 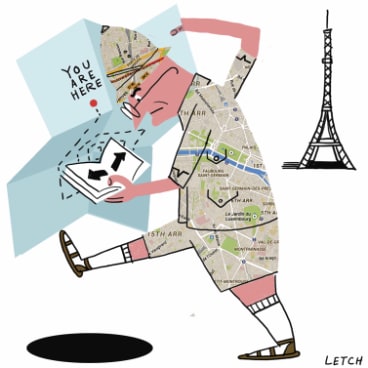 It’s time to look up and get lost.Credit:Illustration: Simon Letch

The dot seems to have developed a loathing of overpasses, a reluctance to recognise tunnels, and a strange desire to move destinations even as you think you are walking towards them (is this because I’ve got a network problem or because some geographical database isn’t being maintained?). I had nurtured some small ability in myself to try to get a grip on my local landscape, such as memorising lane numbers on highways or remembering to turn right just after passing the pub with the cauliflower sign. But all that has now disappeared. For the years since using Google Maps, I’ve worried more about how the blue dot is behaving than I have in paying attention to what’s around me. I don’t notice the roses along the way. I note the dot on where I stand but not what’s around me.

Which brings me to the second worrying thing about my reliance on this miracle app. Apparently reading actual maps is really great for your brain, as Alex Salkever and Vivek Wadhwa point out in their book Your Happiness Was Hacked. They cite Canadian researchers who found “significantly lower brain activity” in those who used GPS to navigate compared to those who used landmarks to get themselves around – and the implication is that reading maps is better for our cognitive abilities.

And thirdly, I fear that the introduction of the new For You tab, a personalised feed of all your usual haunts and what Google thinks you might like will introduce a whole new level of filter bubble, extending not just to your virtual world but to your physical world as well. I may never discover that new cafe around the corner.

In a lovely map memoir by Alex Marshall, where he recalls getting lost in the tiny streets of Venice, he reminds me that Marshall McLuhan outlined the phenomenon where a technology might seem like an improvement, an extension, but in fact, our reliance on it limits our capacities, in much the same way we see that the dependence on calculators eroded our abilities to calculate even the simplest of financial transactions.

I read that story one night after a day of walking the streets of a city I've never visited before. I then realised I'd spent too much time looking at the dots and not enough time joining the dots together.

It's time to look up and get lost.

Jenna Price is an academic at the University of Technology Sydney.