Why you should NEVER clean your ear with a cotton bud

Why you should NEVER clean your ear with a cotton bud: How it can lead to infections, perforated ear drums and tinnitus

Paramedics who arrived to help a young man who had collapsed one afternoon were totally mystified.

Only 31 years old, he had, without any warning, started having seizures and violent headaches. He was also forgetting people’s names — and then he passed out.

After being taken to A&E at Coventry Hospital, he was quickly sent for a brain scan which solved the riddle: two pus-filled abscesses on the lining of his brain.

The cause? A piece of cotton bud found buried deep inside his left ear.

The bud had led to necrotising otitis externa, a bacterial infection that starts in the ear canal before spreading to the skull, where it eats through the bone. 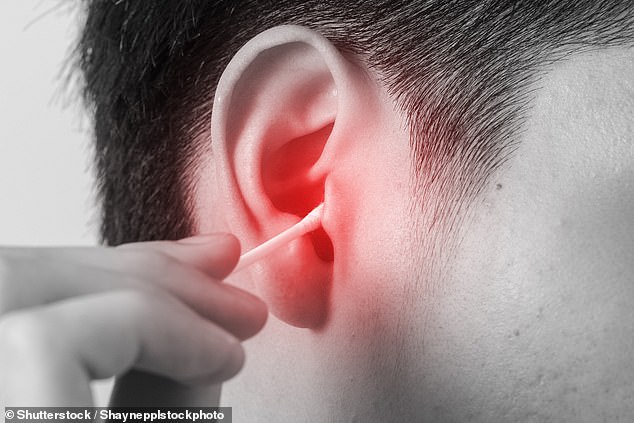 The NHS, GPs and even the manufacturers warn against digging inside the ear with cotton buds — but millions still do it

Facial nerves can also be affected, causing a stroke-like droop. Also known as malignant otitis externa, it is usually seen in the elderly, and others with a compromised immune system. While rare, it can be fatal.

The unnamed man, whose case was detailed in the journal BMJ Case Reports in March, did not know how long the cotton bud tip had been there. But he told his doctors he’d suffered ‘intermittent left ear pain and hearing loss’ for the past five years.

The cotton tip had to be removed under anaesthetic. The patient made a full recovery — but only after eight weeks of intravenous antibiotics. ‘Most importantly,’ wrote his doctors, ‘he is no longer using cotton buds’.

It’s an extreme example, but cotton buds can cause a range of problems, including infections, impacted earwax, perforated ear drums and tinnitus.

The NHS, GPs and even the manufacturers warn against digging inside the ear with cotton buds — but millions still do it.

Nearly two-thirds of us, in fact, according to a YouGov survey of 1,730 people in February — and we get through nearly two billion of the things a year.

‘A lot of people seem to think earwax is dirty, but it is natural and important,’ says Dr Roger Henderson, a GP from Dumfries, with more than 30 years experience of treating ear problems.

‘I’ve seen patients put pencils and even hair clips down their ear canal to clean it. It just damages the lining, and can be dangerous.’

Earwax, or cerumen, acts as a filter, trapping dust and dirt. It also repels water, lubricates the delicate ear lining and, being slightly acidic, kills bacteria. 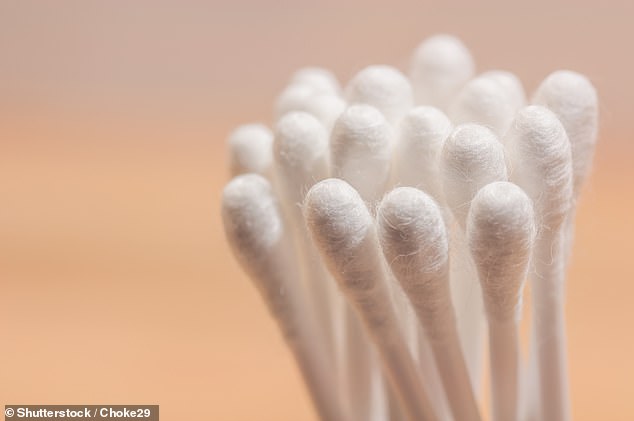 Nearly two-thirds of us, in fact, according to a YouGov survey of 1,730 people in February — and we get through nearly two billion of the things a year

‘In most cases, cotton buds simply ram wax further down the ear,’ says Dr Henderson. The wax then becomes impacted, hardening and blocking the ear, causing hearing problems. Poking around inside the ear can also perforate the ear drum, leading to potentially permanent hearing loss.

And, as the man in Coventry found, infections are also a risk.

Vik Veer, a consultant surgeon at the Royal National Throat, Nose and Ear Hospital in London, sees people with infections ‘on a daily basis’. ‘In their most extreme form, these ear canal infections may progress to malignant otitis externa, particularly in the elderly or in diabetics,’ he says. ‘We’ve always had one or two such patients on the ward.’

So, how should you clean your ears? The short answer is, don’t.

‘That’s how cavemen cleaned their ears — they just left them,’ says Mr Veer.

The skin lining the ear is constantly growing outwards from the ear drum and earwax is transported along it. When it reaches the outer ear, it falls out naturally.

However, if you use cotton buds, it is likely you have damaged the lining, upsetting the delicate ‘conveyor belt’ system and wax will be building up.

Mr Veer advises using sodium bicarbonate drops — available from chemists — to dissolve stubborn wax. Use once or twice a day, going down to once a week, for between two and five months while the lining heals.

Olive oil drops soften wax, rather than melting it, but are useful ahead of having wax professionally removed. If you have been using cotton buds regularly, to protect against infections until the lining heals, Mr Veer recommends using EarCalm, an antibacterial spray, at least once a day.

As we age, wax becomes harder and drier, which can hinder its natural movement out of the ear.

Signs of wax build-up include hearing loss, a feeling of fullness in the ear and a ringing or crackling sound.

If you think wax is blocking your ears, the NHS recommends seeking a pharmacist’s advice, followed by seeing a practice nurse who can perform microsuction, in which a miniature vacuum sucks out the wax. This is also available privately, with providers charging around £35 per ear.

Dr Henderson, a spokesman for Earex ear drops, says that home syringing should be avoided. ‘If used incorrectly, there’s a risk you could perforate the ear drum.’

And ‘ear candling’, in which a lit, hollow candle is inserted into the ear in the belief it draws out the wax, ‘is a really bad idea’, says Mr Veer. Apart from the danger of burns, studies show it can deposit candle wax in the ear.

‘Please don’t use candles for earwax,’ says Mr Veer. ‘Use them for romance and power cuts.’