Woman's pain was endometriosis, but why did it take years to diagnose?

My shoulder pain was caused by my periods: Woman’s pain was a symptom of endometriosis, but why did it take years to diagnose?

The pain that hit Emma Johnston’s right shoulder and upper back every few weeks was so intense that she would double over, unable to talk.

But with no obvious cause, she just put up with it — until it slowly dawned on her that the shoulder pain was coinciding with her period.

In fact, the pain was a symptom of endometriosis — a condition where cells similar to the ones that line the womb grow in other areas of the body.

This extra tissue commonly develops around the bladder or bowel, the abdomen or in the wall of the womb itself — but there have been cases reported of it growing in the lungs as well and, as in Emma’s case, in the chest area, and even the nose. 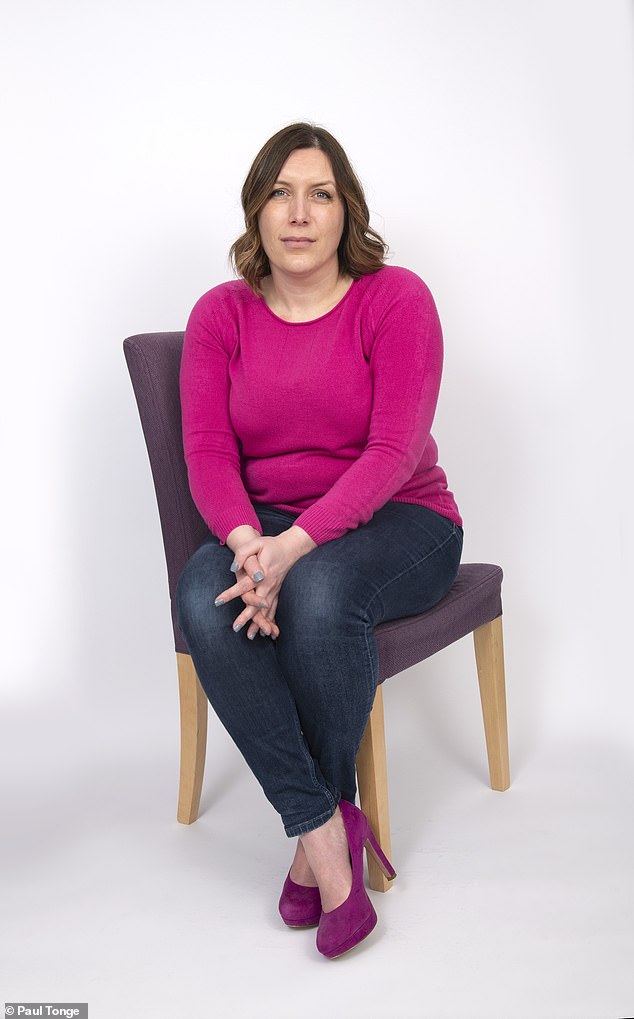 ‘It’s how I’d imagined being shot would feel,’ says Emma, 39, a former secondary school maths teacher. But with no obvious cause, she just put up with it — until it slowly dawned on her that the shoulder pain was coinciding with her period

‘These cells are influenced by the fluctuation of sex hormones in the body, such as those in the womb, and they ‘menstruate’ once a month —however, the blood cannot leave the body in a usual way,’ explains Denis Tsepov, a consultant gynaecologist at the Princess Grace Hospital in London.

As well as causing painful, heavy periods, the tissue can, for example, block the fallopian tubes, leading to fertility problems, pain during sex or irritable bowel-type symptoms.

‘It might, for instance, cause pain during bowel movements or urinary bladder pain during the period,’ adds Mr Tsepov.

‘But if it infiltrates the ureters [the tiny tubes draining urine from the kidneys], it can result in kidney failure.

‘Women can also experience long-term fatigue due to the body’s efforts to eliminate the diseased tissue.’

And these problems won’t necessarily be restricted to during a woman’s period.

‘Some have bowel and bladder problems, for example, or pelvic pain throughout the cycle,’ says Mr Tsepov.

The broad spectrum of symptoms can make it difficult to diagnose, and even though one woman in ten of reproductive age suffers from the condition, it takes on average eight years from the onset of symptoms to get a diagnosis, a figure that has not changed in a decade.

This is unacceptable, says Dr Edward Morris, president of the Royal College of Obstetricians and Gynaecologists. ‘Raising awareness among girls, women and healthcare professionals is essential to reducing the delays in diagnosis.’

Even those who are diagnosed may then face unprecedented waits for treatment. NHS figures released yesterday revealed that gynaecology waiting lists in England have risen 60 per cent during the pandemic and are rising more than any other speciality. 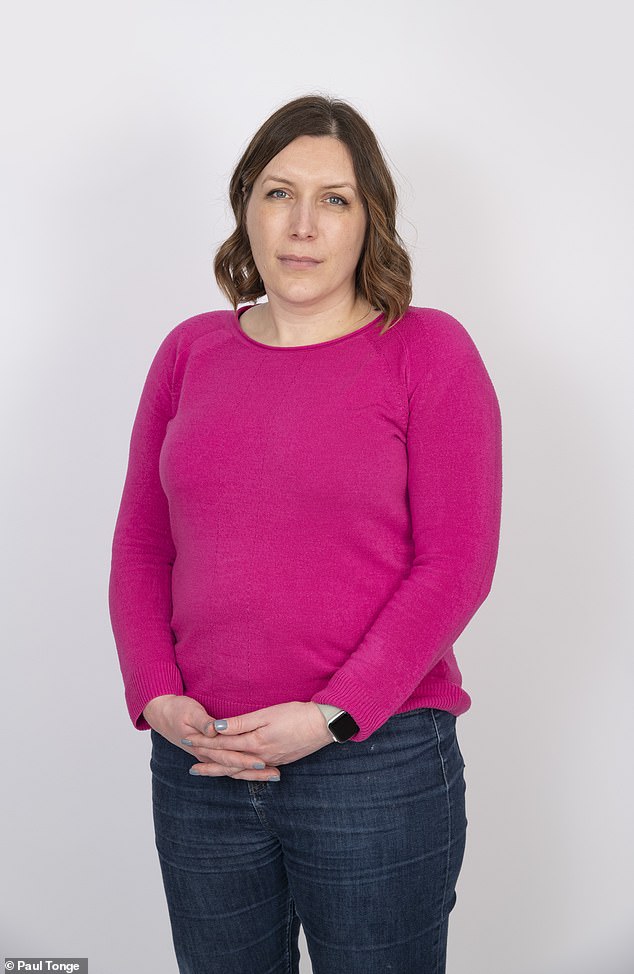 Emma underwent four-and-a-half hours of surgery to cut away the endometriosis from her uterus, bladder, rectum, colon and ureter

Across the UK, there are currently more than 570,000 women waiting for treatment. For those with endometriosis it means even more painful delays.

In Emma’s case it took 25 years for her endometriosis just to be diagnosed. Her symptoms began — as is typical — when her periods started at the age of 12.

‘I’d been told periods would last four to seven days,’ says Emma, who lives with her partner John, 38, a call centre adviser, in Redditch, Worcestershire.

Emma had to set an alarm to change her sanitary towel every hour as her bleeding was so heavy. ‘It was exhausting,’ she says. ‘I’d set a timer day and night. On really heavy days I had to stay off school and miss lessons.’

Because her periods were so heavy, her mother took her to the GP after her third one and Emma was prescribed mefenamic acid, a drug that makes periods lighter by thinning the womb lining.

At 16 she saw a gynaecologist, who told her she would grow out of it and sent her home. ‘I was devastated!’ she says.

‘I was being told that heavy periods that made me miss school and made me bleed through my clothing were something I just had to put up with.’

At university, where she read maths and physics, she could have periods lasting up to 60 days. In 2009, Emma, then aged 26, saw a locum GP. ‘She read my notes, looked at me and said: ‘You’ve got endometriosis.’ She had deduced it just from my medical history.

‘This doctor was at last giving my condition a name,’ she says.

Yet during a subsequent appointment with a gynaecologist, Emma was told it wasn’t endometriosis because nothing was found on her ultrasound scan.

‘But I read up about it and found that endometriosis doesn’t always show up on scans,’ Emma recalls.

Emma spent the next few years going back and forth to gynaecologists with pain and heavy bleeding — and then the pain began in her shoulder.

She read academic papers on the internet and found some research into thoracic endometriosis — where the endometriosis appears on tissue in the chest cavity and diaphragm.

‘I just gasped,’ says Emma. ‘This was me they were describing, even down to the excruciating shoulder pain.’ But when she presented her research to her gynaecologist, he said: ‘It’s too rare. It can’t possibly be that.’

Emma left in tears, knowing from her research that thoracic endometriosis is, in fact, the most common location for the condition outside the pelvis.

The difficulty is that the symptom — menstrual shoulder pain — ‘is relatively rare’, explains Mr Tsepov. ‘This may indicate deep, infiltrating endometriosis on the diaphragm [the band of muscle that separates the chest from the abdomen].’

The endometrial tissue, he says, can then irritate the diaphragmatic nerve which runs up to the shoulder — resulting in the sense of shoulder pain. He adds that it is hard to see such embedded endometriosis with an ultrasound or MRI ‘and it is best diagnosed during laparoscopy’, which is when a camera is inserted into the area in a keyhole procedure.

Quite why endometriosis, which can have genetic links, may in some cases migrate to unusual areas in the body is not clear, says Mr Tsepov.

For Emma, being told her shoulder pain was not endometriosis-related was the straw that broke the camel’s back.

Just two days later she opted to go to a private clinic and saw a gynaecologist who told her it sounded as if she had diaphragmatic endometriosis.

‘I could have wept with relief,’ says Emma. She was referred to an NHS hospital and finally, in October 2019, after an MRI scan by then showed large areas of endometriosis on Emma’s diaphragm — and extensively throughout her pelvis — Emma was offered surgery.

While the pain can be helped with analgesia, and eases after menopause, surgery remains the only treatment option, although studies show that there is a 20 to 40 per cent recurrence rate and in some cases women’s symptoms can be worse after surgery.

Emma underwent four-and-a-half hours of surgery to cut away the endometriosis from her uterus, bladder, rectum, colon and ureter. ‘It was everywhere,’ she says.

Four months later, in February 2020, she went back in for surgery to remove the endometriosis from her diaphragm.

Despite undergoing two major operations, the pain started to return within nine months in another area of her diaphragm.

Scientists who made medical advances by putting their bodies on the line. This week: William Stark and vitamin C.

What we know today about the importance of vitamin C is largely thanks to the English scientist William Stark, who in 1769 conducted a series of nutritional self-experiments in search of the causes of scurvy.

He began his research by eating nothing but bread, water and a little sugar for 31 days, gradually adding other foods such as beef, olive oil and milk to his diet, one at a time. Notably, what he didn’t include were citrus fruits and veg, which are key sources of vitamin C. Stark ended up with bleeding gums and severe malnourishment — symptoms similar to scurvy, which affected many British sailors at the time — leading to his death at the age of 29 after eight months of self-experimentation.

While he didn’t discover anything new about scurvy at the time, his detailed notes helped later researchers understand the importance of fresh fruit and veg and vitamin C.

Ascorbic acid, which we now recognise as vitamin C, wasn’t discovered until the 1930s.

‘I feel like I am being stabbed in the chest and upper back with screwdrivers,’ she says.

‘I will need further surgery. It is very upsetting as nothing can ‘cure’ it.’

In the meantime, she has been having injections of the contraceptive Depo-Provera every 12 weeks — which helps by allowing her to have a six-week gap in between her periods.

Emma says that over the years, after she had been diagnosed with endometriosis, several doctors had told her to try to ‘cure’ it by ‘getting pregnant’.

As a woman’s periods stop during a pregnancy, it can mean a halting in or diminishing of the endometriosis symptoms — but they will return when the periods come back.

Mr Tsepov suggests it is also a carelessly unkind suggestion, as up to 50 per cent of infertile women have endometriosis. Not only does the condition lead to scarring which can make it difficult to conceive, it can also increase the risk of miscarriage.

Mr Tsepov says that if women feel they are not being listened to, they should push to be referred to a gynaecologist or specialist endometriosis clinic.

‘They can carry out a detailed clinical assessment of your symptoms,’ he says, and ‘possibly an MRI and a laparoscopy, the gold standard diagnostic procedure.’

On bad days, Emma is still in so much pain she cannot leave the house and can no longer do the aerobics she once loved. She has also had to leave teaching.

But she is grateful she at least knows what is wrong with her: ‘I hope my story helps other women out there who might not be being listened to, or whose symptoms might be unusual like mine.

‘Only through talking about this can we help raise awareness.’