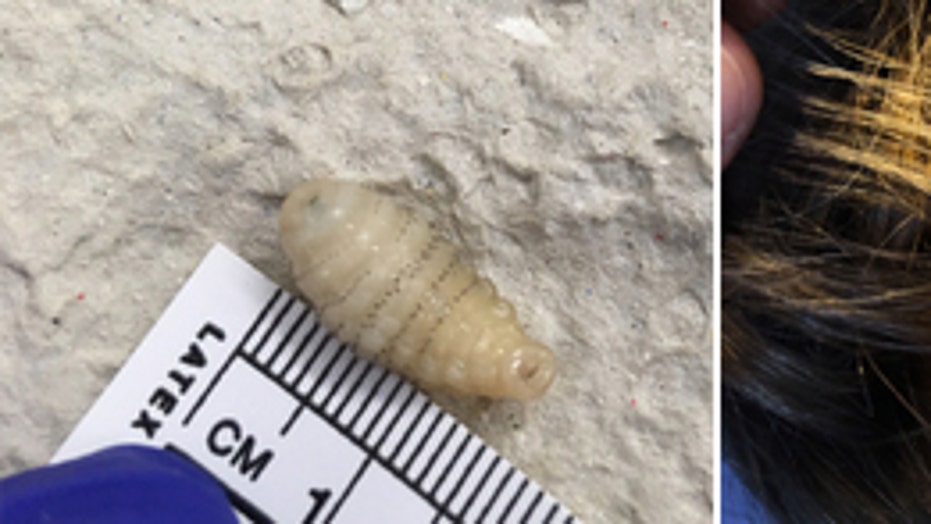 Fox News Flash top headlines for May 30 are here. Check out what’s clicking on Foxnews.com

A U.K. woman who complained of general illnesses and itchy raised lesions on her scalp after a trip to Argentina likely never guessed her symptoms were stemming from wriggling botfly larvae that were calling her head home for several weeks.

The unidentified 50-year-old was treated for an ear infection, and her physician diagnosed her itchy scalp lumps as cysts and prescribed her separate antibiotics, according to BMJ Case Reports. But over the next three weeks, the “cysts” began oozing a clear fluid and grew painful.

She could also “sense movements within her scalp around the affected regions.” 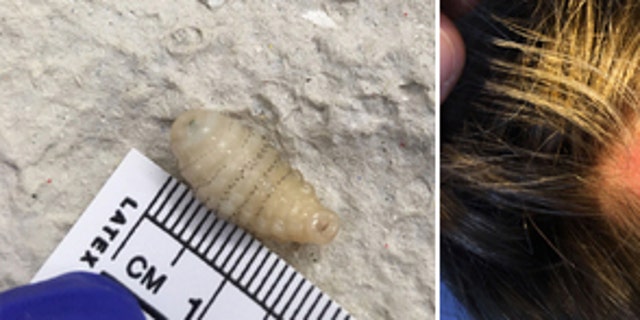 One larva exited her head after Vaseline was applied over the opening, but the other, which died while under her scalp, required surgical removal.
(BMJ Case Reports)

“By the time she was admitted to the hospital, seven weeks after returning to the U.K., the cysts were approximately 2-cm in diameter, raised, but not inflamed, each with a noticeable central punctum,” according to the case report.

At some point, a doctor suggested a human botfly infestation, and they attempted to extract the larvae with Vaseline. The approach works because it blocks the hole in which the larvae breathe through, forcing it to surface.

“The patient was taken to the theatre (operating room) by the plastic surgery team the following day and the remaining larva was removed under local anesthetic. Both wounds were washed out with saline and antibiotic ointment was applied to the scalp,” the report said.

According to the report’s authors, the case, referred to as myiasis, was unusual for botfly infestation in humans because of the occurrence of two larvae as opposed to the typical one larva. The incidence occurs after a process called phoresis, which is when a botfly captures a mosquito and deposits its eggs on it, and the mosquito then bites a human and transfers the eggs.

“The warmth of the host’s body triggers the fly eggs to hatch, and the larvae then burrow into the subcutaneous tissue,” according to the case report. “Here they can remain anywhere between 4 and 18 weeks.”

While this patient had the larvae extracted, in other occurrences it may exit naturally on its own.

The patient, who said she had traveled to Iguazu Falls and was bitten by mosquitos several times while on her trip, was advised to take warm showers twice daily, and apply ointment over the wounds.

The case is similar to another published by BMJ Case Reports, which involved a 55-year-old U.K. woman who had a growing lump on her head following a trip to Uganda. Doctors had identified Lund’s Fly larva in her hairline, and surmised that a fly or maggot had likely laid eggs on a towel that she used to wrap her hair, which then burrowed into her head.