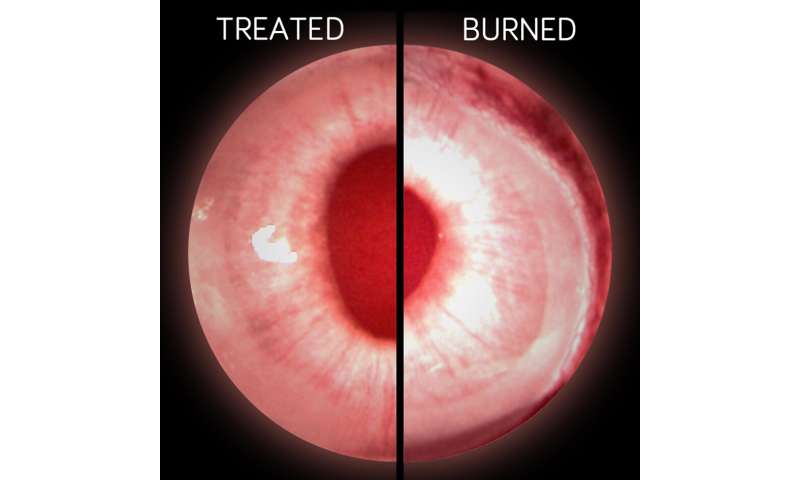 New research led by scientists at Newcastle University, UK reveals a potential revolutionary way to treat eye injuries and prevent blindness—by softening the tissue hosting the stem cells which then helps repair wounds, inside the body.

The team discovered that the simple application of a tissue-softening enzyme, collagenase, prevents the loss of corneal stem cells following an injury and could prevent patients from losing their sight. It offers hope to almost 500,000 people a year who lose their sight due to chemical burns including acid attacks.

The study, published today in Nature Communications and funded by the Medical Research Council shows that keeping corneal stem cells in a soft environment is fundamental for their reproduction, self-renewal, and ability to heal damaged tissue.

This discovery was made possible by the development of a sophisticated microscopy technique which enables imaging the physical properties of biological tissues at very high resolutions. Using this technology in collaboration with experts in Photonics from Imperial College London, the team was able to determine that the corneal stem cell niche—the area of tissue in the cornea where stem cells live—is a much softer environment than the rest of the tissue.

The scientists also discovered that stiffening the niche causes stem cells to mature and lose their self-renewing and wound healing properties.

Dr. Ricardo Gouveia, Research Fellow at Newcastle University and first author of the paper said: “This study demonstrates a potential new way to treat injuries by changing the stiffness of the natural environment which we have shown changes the behaviour of the adult stem cells. Our imaging approach provides a valuable tool to analyse live cells within the cornea, as well as to further explore new therapies for restoring or even improving their function.”

A new look at the cornea

As the outermost layer of the human eye, the cornea has an important role in focusing vision yet many of the processes keeping it transparent and resistant to damage are not well understood. Like skin, the cornea is covered by a multi-layered epithelium forming a barrier to physical harm and invading microorganisms. But unlike the skin, when injury occurs the corneal epithelium is repaired by stem cells clustered in the tissue’s periphery, first by quickly dividing in great numbers and then by migrating towards the damaged site as matured epithelial cells in order to seal the wound.

However, this healing process can be compromised when injuries reach the stem cell niche. The research now published has important implications for developing new ways to heal this type of damage.

The director of this study and leader of the Tissue Engineering Lab at Newcastle University, Professor Che Connon, explained: “We can now prove that the cornea becomes stiffer when exposed to injuries such as those caused by what are commonly known as acid attacks, and demonstrate that wound healing is impaired due to stem cells differentiating in response to the stiffening of their otherwise soft niche, and not because they are killed during injury, as previously thought.

“This is an exciting development in the field of corneal biology, and allows us to better understand how vision works. But even more important, it provides us with a new set of strategies to treat eye conditions which were until now inoperable. We call these less invasive strategies Biomechanical Modulation Therapies.”

From lab bench to bedside

In the work, the researchers from Newcastle, collaborating with scientists at the University of Missouri, USA, also developed a proof-of-concept therapy to help restore corneal stem cell function and improve tissue regeneration following chemical eye burns.

Using live corneal tissues as a model system, the team recreated the effects of chemical burns. After treating the wounded, stiffened areas of the cornea using small and localised doses of collagenase, a tissue-softening enzyme to restore the stem cell niche, it once again became pliable and able to support stem cells and promote healing. This collagenase formulation has already been approved for related therapeutic applications by both the US Food and Drug Administration and the European Medicine Agency.

Dr. Gouveia added: “We show that the topical application of collagenase is safe and effective in restoring the normal stiffness of the cornea and helps tissue regeneration by preventing the differentiation and loss of adult stem cells after such injuries. We were further surprised to discover that the ability for a wound to heal was not directly caused by a lack of stem cells, but instead due to the environment these cells are exposed to. This really makes our therapy revolutionary.”

The scientists believe the same technique could be applied to help alleviate the lack of corneas available for transplantation by the almost 5 million people suffering from total blindness due to corneal scarring caused by burns, lacerations, abrasion or disease. In addition, ten million people worldwide are estimated to require surgery for preventing corneal blindness as a result of diseases such as trachoma, an infectious eye disorder affecting many people in developing countries. There is a real and pressing need for new therapies to treat these diseases which are both simple and cheap.

The scientists intend to further expand the research, working with health partners to further test the potential of this study. Professor Connon explained: “Our research shows that corneal stem cells grow better in softer environments. We now want to build on that knowledge and test this method in patients, using biomechanical modulation therapy to re-create suitable environments for corneal stem cells to thrive within the body whenever their original niche is compromised by injury or disease.