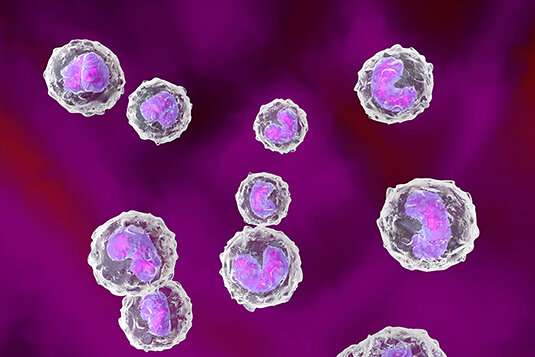 LMU researchers report that a central component of the innate immune response is activated by two short RNAs which are produced by site-specific cleavage of a precursor RNA molecule—and both derivatives are generated by the same enzyme.

The innate immune system can be thought of as the frontline in the body’s fight against invasive pathogens. Cells possess specialized receptors that can distinguish between RNAs derived from foreign cells—such as pathogenic bacteria and viruses—and “native” RNAs. Recognition of the former then activates the appropriate immune response to eliminate the invaders. However, the molecular mechanisms that underlies this mode of detection has remained obscure. Now LMU immunologist Professor Veit Hornung, in collaboration with LMU chemist Professor Thomas Carell, has discovered that the activation of one of these receptors, called TLR8, is mediated by the binding of two specific RNA fragments, generated by degradation of foreign RNA—and that both breakdown products are generated by a single enzyme called RNase T2. The new findings appear in the leading journal Cell.

“Earlier work had suggested that foreign RNA molecules are not recognized as a whole, but must first be cut into smaller fragments before they can be recognized by the innate immune system,” says Hornung. To explore the recognition process further, he and his colleagues specifically deleted the genes for individual RNases in a human cell model. They then asked how the loss of each of the RNases affected the activation of TLR8, which is known to be an important sensor of bacterial RNA in human cells. “We chose to work with a human cell model in this case, because the version of the receptor found in mouse acts in a different way,” explains Wilhelm Greulich of Veit Hornung’s research group, who is joint first author of the new study.

The team found that only the cells that lacked the gene for RNase T2 failed to trigger the TLR8 mediated response to bacterial RNA, clearly pointing to a central role of this enzyme in the activation of the receptor. Notably, RNase T2 has been highly conserved over the course of evolution. The enzyme is found in virtually all classes of organisms and its structure has remained largely unchanged. This high degree of conservation strongly indicates that it carries out an essential cellular function, and that this mechanism may also play a role in other species.