Chromosome 5 comprises 194 million base pairs, that make-up 844 confirmed genes (6% of all the genetic material in our genome). Despite being one of the largest human chromosomes, chromosome 5 has one of the lowest gene densities, owing to a significant amount of non-coding DNA between genes. 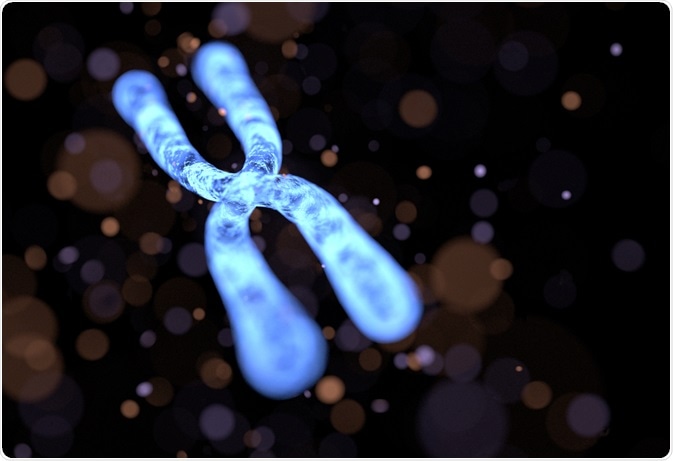 SMA is an autosomal recessive inherited neuromuscular and degenerative disease in which the motor-neurons of the spinal cord and brainstem degenerate, causing progressive muscular weakness and wasting.

Mutations in the SMN1 gene found on 5q13 have been linked to SMA. SMN1 (a telemoric copy) encodes a critical protein called ‘survival of motor neuron’ protein, which, as the name implies, is important in the development and survival of motor neurons. The severity of the condition depends on how functional SMN2 is (the centromeric copy). SMN2 is able to, in part, make up some of the protein, although this is not a proportional relationship and other factors can influence severity.

Cri du chat (‘cat cry’) syndrome is also known as 5p-syndrome is caused by a deletion on the short arm of chromosome 5 (5p). The most common symptoms are a ‘cat-like cry’, a high-pitched voice, severe early intellectual disability, low-set backwardly rotated ears and prominent eye-folds.

A deletion on the long arm of chromosome 5 (5q) results in a bone marrow disorder, myelodysplastic syndrome, where blood cells do not mature and fail to develop normally. Individuals with 5q- syndrome suffer from anemia (reduced red blood cells), abnormalities in platelet production (impaired clotting) as well as an increased risk of acute myeloid leukemia (AML).

In 5q-syndrome, approximately 1.5 million base pairs of DNA are deleted, which contains 40 genes. Importantly, the loss of RPS14 leads to red blood cell abnormalities, and the loss of MIR145 causes platelet dysfunction.

5q31.3 microdeletion syndrome is a complex disorder characterized by weak muscle tone, swallowing and breathing difficulties, severe development of speech and motor skills. In addition, there are distinct structural features such as a narrow forehead, spaced eyes, open mouth with a tented upper lip as well as a lack of facial expression. These can be attributed to muscle tone weakness (hypotonia). Furthermore, seizures (epilepsy) are also common.

As the name suggests, this condition is caused by a small deletion on the long arm (q) of chromosome 5 (at point q13.1). The deletion can cause the loss of several thousand DNA base pairs. In this region, there are 3 key genes, with the loss of the gene PURA, being the most significant. PURA is involved in the development of the brain by allowing neurons to grow and divide as well as being involved in myelination (protecting nerves).

Other conditions associated with chromosome 5:

Osman is a Neuroscience PhD Research Student at the University of Sheffield studying the impact of cardiovascular disease and Alzheimer's disease on neurovascular coupling using pre-clinical models and neuroimaging techniques.