For the first time, engineers have demonstrated an electronic device to monitor beating heart cells without affecting their behavior. A collaboration between the University of Tokyo, Tokyo Women’s Medical University and RIKEN in Japan produced a functional sample of heart cells with a soft nanomesh sensor in direct contact with the tissue. This device could aid study of other cells, organs and medicines. It also paves the way for future embedded medical devices.

One way or another, cardiac research is fundamentally important everyone. Sunghoon Lee, a researcher in Professor Takao Someya’s group at the University of Tokyo, came up with the idea for an ultrasoft electronic sensor that could monitor functioning cells, and his team jumped at the chance to use this sensor to study heart cells, or cardiomyocytes, as they beat.

“When researchers study cardiomyocytes in action, they culture them on hard petri dishes and attach rigid sensor probes. These impede the cells’ natural tendency to move as the sample beats, so observations do not reflect reality well,” said Lee. “Our nanomesh sensor frees researchers to study cardiomyocytes and other cell cultures in a way more faithful to how they are in nature. The key is to use the sensor in conjunction with a flexible substrate, or base, for the cells to grow on.”

For this research, collaborators from Tokyo Women’s Medical University supplied a healthy culture of cardiomyocytes derived from human stem cells. The base for the culture was a very soft material called fibrin gel. Lee placed the nanomesh sensor on top of the cell culture in a complex process, which involved removing and adding liquid medium at the proper times. This was important to correctly orient the nanomesh sensor.

“The fine mesh sensor is difficult to place perfectly. This reflects the delicate touch necessary to fabricate it in the first place,” continued Lee. “The polyurethane strands which underlie the entire mesh sensor are 10 times thinner than a human hair. It took a lot of practice and pushed my patience to its limit, but eventually I made some working prototypes.”

To make the sensors, first a process called electro-spinning extrudes ultrafine polyurethane strands into a flat sheet, similar to how some 3-D printers work. This spiderweb-like sheet is then coated in parylene, a type of plastic, to strengthen it. The parylene on certain sections of the mesh is removed by a dry etching process with a stencil. Gold is then applied to these areas to make the sensor probes and communication wires. Additional parylene isolates the probes so their signals do not interfere with one another. 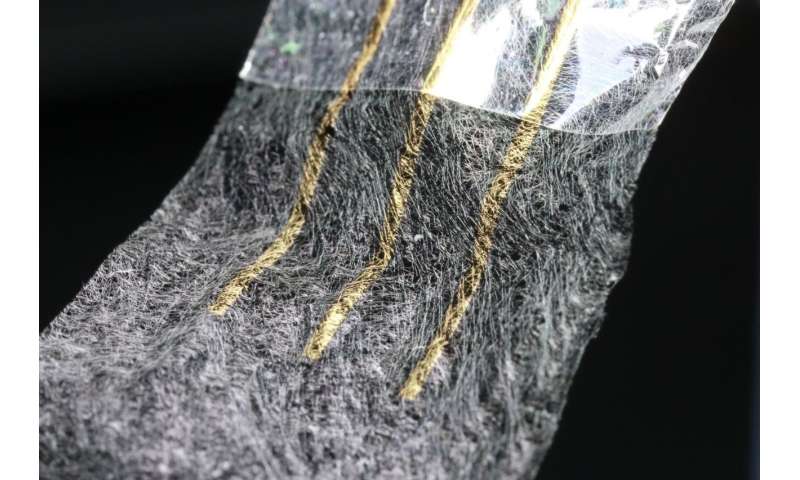 With three probes, the sensor reads voltage present at three locations. The readout appears familiar to anyone who’s watched a hospital drama, as it’s essentially a cardiogram. Thanks to the multiple probes, researchers can see propagation of signals, which result from and trigger the cells to beat. These signals are known as an action or field potential, and are extremely important when assessing the effect of drugs on the heart.