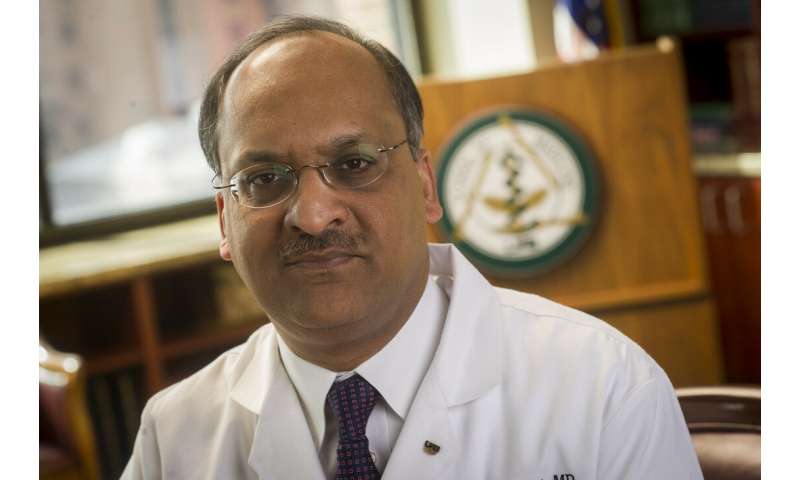 During development in the womb, immune cells called macrophages go to the kidneys, and they remain there for life. Understanding the possible healing role for these macrophages after kidney damage may be crucial to helping treat patients who suffer acute kidney injury.

Acute kidney injury, or AKI, is a devastating condition that develops in two-thirds of critically ill patients, and patients with AKI have a 60 percent risk of dying. In AKI, kidneys can become scarred and can show progressive decline in function, becoming unable to heal their tissue.

In a JCI Insight study published today, University of Alabama at Birmingham researchers have found that, during AKI in a mouse model, the kidney-resident macrophages are reprogrammed to a developmental state, resembling these same cells when they are found in newborn mice. Newborn mouse kidneys are still developing. This reprogramming during AKI may be important to promote healing and tissue regeneration. If a similar developmental shift is seen for human kidney-resident macrophages during AKI, that could aid new therapeutic approaches for patients.

In the parabiosis experiments, two mice shared blood circulation for four weeks, and then one underwent ischemia/reperfusion-induced AKI. Because the immune cells of the two mice have different surface markers that identify which mouse they come from, researchers could follow the invasion of the AKI kidneys by circulating immune cells from the healthy mouse. They found that the infiltrating cells contributed only minimally to the kidney-resident macrophage cell pool in the damaged kidneys.

Thus, after kidney injury, the kidney-resident macrophages are a distinct cellular subpopulation that does not differentiate from nonresident, infiltrating, precursor immune cells.

“Macrophage biology has reached a pivotal point,” said Lever, a UAB graduate student and NIH F31 individual fellow. Many basic science research studies have suggested the importance for tissue-resident macrophages in healing after injury, but development of therapies promoting them is still in early stages, Lever says. “In order to successfully utilize these cells for contemporary translational interventions, I believe we will need to be specific about the origin—tissue-resident versus infiltrative—of the cells we plan to target.”

Hull, now a surgery resident at Massachusetts General Hospital in Boston, said, “This work demonstrates that tissue resident macrophages possess the same plasticity that has been demonstrated in other immunological cell types. Moreover, this ability to reprogram to an early ontological phenotype is a potential avenue for therapeutic intervention, if the cellular signals and mechanisms of this reprogramming can be fully elucidated.