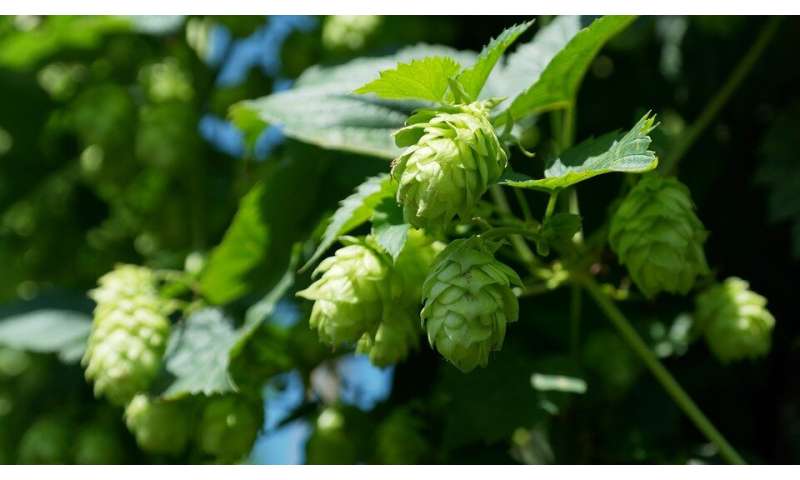 The plant that adds flavor, color and bitterness to beer also produces a primary compound that thwarts cancer cells, and two important derivatives of the compound do as well, new research at Oregon State University shows.

Unlike the primary compound, xanthohumol, known as XN, the derivatives don’t metabolize into phytoestrogens. Phytoestrogens are plant-based chemicals similar to female sex hormones that help some types of tumors grow and can cause other health problems as well.

The research showed, for the first time, that the derivatives have cancer-fighting effectiveness similar to that of XN in liver and colon carcinomas. That means the two non-estrogenic derivatives are attractive alternatives for testing, along with XN, in future preclinical studies..

The study was published in the International Journal of Molecular Sciences.

Xanthohumol is produced by humulus lupulus, the common hop plant. More than 20 years ago, researchers discovered that XN inhibits cell growth in a variety of cancer cell lines.

“But a potential problem with XN is that enzymes in the liver and the gut microbiota metabolize it into 8- prenylnaringenin, or 8-PN, the most potent phytoestrogen known,” said the study’s corresponding author, Adrian Gombart, professor of biochemistry and biophysics in the College of Science at Oregon State University and principal investigator at OSU’s Linus Pauling Institute.

Colorectal cancer is the third most common cause of cancer-related death in the United States, and liver cancer ranks fifth. The incidence of liver cancer, though, has tripled in the last four decades.