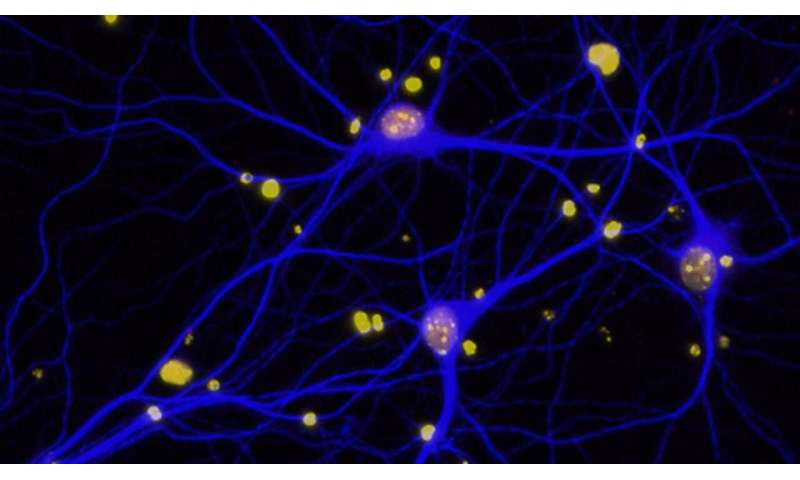 The amyloid precursor protein has always been vilified as a major cause of Alzheimer’s disease. One of its fragments, the amyloid-beta peptide, can break off and accumulate in the brain, giving rise to the puffy white globs known as senile plaques that are a hallmark of the disease.

In a study published recently in the journal Cell Reports, however, researchers at the University of Chicago have redeemed APP as an unlikely hero, uncovering its extended role in brain signaling that can prevent the development of Alzheimer’s disease in mice.

So, when does APP take on the mantle of hero versus swooping in as the villain in the tragic tale of Alzheimer’s disease?

For years, researchers have mainly paid attention to APP for the Aβ segment encoded in the amino acid sequence, like a dormant monster waiting to be unleashed. In the new research however, Angèle Parent, associate professor of neurobiology, and her team demonstrated that the other sections of a chopped-up APP strand matter too. One section plays a crucial role in consolidating spatiotemporal learning and memory in the brain, to the extent that it can prevent the onset of Alzheimer’s disease under the right circumstances.

This long-neglected segment, when tethered to the cell membrane, can participate in a signaling mechanism that triggers the formation of new memories. To promote this tethering, Parent and team fashioned a sticky lipid anchor protein from natural APP. This modified APP segment, called the mAICD, is simple in structure but has enormous functional consequences. Six months after newborn mice were injected with a virus that encouraged a high expression of mAICD in the brain, the results were surprising.

These mice were genetically-engineered to be afflicted with aggressive Alzheimer’s disease at a young age. Normally, they would have suffered from the advanced symptoms of the disease as young as six months old (equivalent to a young adult in humans), if not for the extra mAICD supplied by the researchers.

After the injection, Parent and her team tested the mice’s ability to form spatiotemporal memories. Mice are curious but fickle creatures: familiarity is usually met with indifference. Equipped with a generous helping of mAICD, these mice successfully recalled—or ignored—objects and places previously explored. On the other hand, the control mice with Alzheimer’s who expressed a less interactive version of mAICD, did not recognize supposedly familiar objects and locations at all. They were already gripped by the jaws of the disease.

“When we looked at the mice with the mAICD, they became almost normal,” Parent said. It was as if these mice had never showed signs of Alzheimer’s.

This humble lipid anchor protein was able to keep Alzheimer’s disease at bay in these mice, as long as its expression starts during the brain development stage. The researchers are currently investigating the effects of the same mAICD intervention in the brains of adult mice already afflicted with Alzheimer’s.

“If you’re are born with the Alzheimer’s disease genes, you don’t necessarily have memory problems when you’re young. All that happens much later,” Parent said. “By then, when you already have problems with your memory, will an mAICD boost be able to help you?”

Indeed, the diversity of APP’s functions has exceeded the expectations of earlier researchers. By participating in complex nerve machinery, APP can stimulate the growth of new neurons and strengthen synaptic activity by triggering a series of events associated with memory consolidation. At the same time, APP may also produce Aβ to diminish these memories.