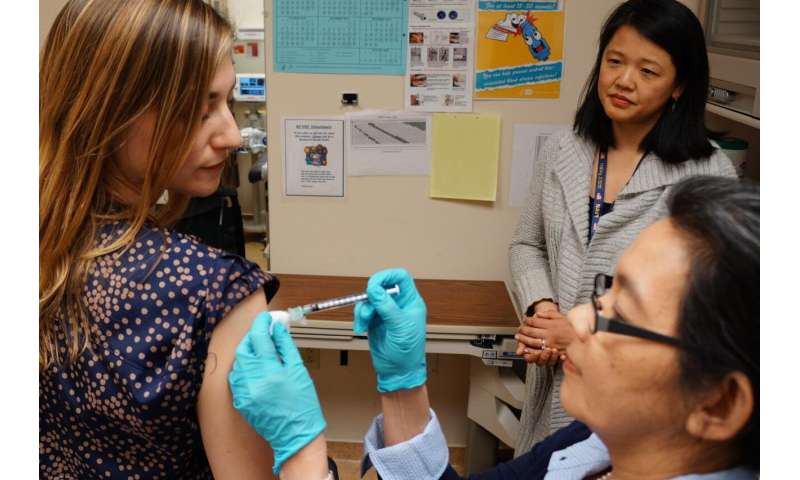 The first clinical trial of an innovative universal influenza vaccine candidate is examining the vaccine’s safety and tolerability as well as its ability to induce an immune response in healthy volunteers. Scientists at the National Institute of Allergy and Infectious Diseases (NIAID), part of the National Institutes of Health, developed the experimental vaccine, known as H1ssF_3928.

H1ssF_3928 is designed to teach the body to make protective immune responses against diverse influenza subtypes by focusing the immune system on a portion of the virus that varies relatively little from strain to strain. The vaccine candidate was developed as part of a broader research agenda to create a so-called “universal” influenza vaccine that can provide long-lasting protection for all age groups from multiple influenza subtypes, including those that might cause a pandemic.

“Seasonal influenza is a perpetual public health challenge, and we continually face the possibility of an influenza pandemic resulting from the emergence and spread of novel influenza viruses,” said NIAID Director Anthony S. Fauci, M.D. “This Phase 1 clinical trial is a step forward in our efforts to develop a durable and broadly protective universal influenza vaccine.”

The clinical trial is being conducted at the NIH Clinical Center in Bethesda, Maryland. It is being led by Grace Chen, M.D., of NIAID’s Vaccine Research Center (VRC) Clinical Trials Program. The trial will gradually enroll at least 53 healthy adults aged 18 to 70 years. The first five participants will be aged 18 to 40 years and will receive a single 20-microgram (mcg) intramuscular injection of the experimental vaccine. The remaining 48 participants will receive two 60-mcg vaccinations spaced 16 weeks apart. They will be stratified by age into four groups of 12 people each: 18 to 40 years, 41 to 49 years, 50 to 59 years, and 60 to 70 years. Investigators hope to understand how participants’ immune responses to the experimental vaccine may vary based on age and the likelihood of their previous exposure to different influenza variants.

Study participants will be asked to record their temperature and any symptoms on a diary card for one week after each injection. They also will be asked to visit the clinic to provide blood samples at various time points. Investigators will test the samples in the laboratory to characterize and measure levels of anti-influenza antibodies, which are potentially indicative of immunity against influenza. Participants will return for nine to 11 follow-up visits over 12 to 15 months. They will not be exposed to any influenza virus as part of the clinical trial.

“This Phase 1 clinical trial is the culmination of years of research and development made possible by the unique collaborative setting that the VRC offers by bringing together top scientists, manufacturing expertise, and an outstanding clinical team,” said VRC Director John Mascola, M.D.

A team of VRC scientists developed the universal influenza vaccine prototype. It displays part of hemagglutinin (HA), an influenza protein, on the surface of a microscopic nanoparticle made of nonhuman ferritin. Ferritin is a natural protein that can be found in cells from all living species. It is useful as a vaccine platform because it forms particles that can display multiple influenza HA spikes on its surface, mimicking the natural organization of HA on the influenza virus.

HA, which enables the influenza virus to enter a human cell, is composed of a head and stem region. The body can mount an immune response to both regions, but most of the response is directed toward the head. Influenza vaccines must be updated each year because the HA head constantly changes—a phenomenon called “antigenic drift.” The new vaccine candidate consists of the HA stem only. The stem is more constant than the head among influenza strains, and thus less likely to need to be updated every season. Many scientists predict that targeting the HA stem without the distraction of the HA head could induce broader and longer lasting immunity.

Scientists used the stem of an H1N1 influenza virus to create the candidate vaccine. H1 refers to the HA subtype of the virus and N1 refers to the neuraminidase (or NA, another influenza surface protein) subtype. Although there are 18 known HA subtypes and 11 known NA subtypes, only H1N1 and H3N2 circulate among people seasonally. However, H5N1 and H7N9 and other strains have caused a handful of deadly outbreaks and have the potential to cause a pandemic if they become more easily transmissible.

Initial data from an earlier VRC clinical trial evaluating a ferritin nanoparticle vaccine that included both hemagglutinin head and stem showed that the platform is safe and well-tolerated in humans. As with all clinical trials, a protocol safety review team will regularly assess study data to monitor safety of the participants in this Phase 1 study.