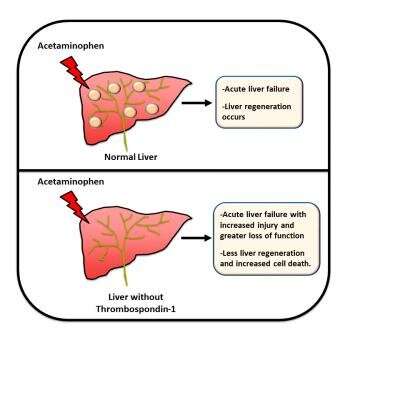 Acetaminophen—a commonly used pain reliever and fever reducer—is the leading cause of quickly developing, or acute, liver failure in the U.S. Findings from a new mouse study suggest that treatments that increase levels of the protein thrombospondin-1 could help the liver recover from an overdose of acetaminophen.

“The only treatment available now for acetaminophen overdose must be administered early, before significant liver injury occurs,” said Matthew McMillin, Ph.D., who performed the research. “We are working to identify new drug targets to improve treatment options and reduce the need for liver transplantation, which is often the only option for patients with acute liver failure due to drug toxicity.”

McMillin, an assistant professor at the University of Texas at Austin and research biologist at Central Texas Veterans Health Care System, will present the research at the American Society for Investigative Pathology annual meeting during the 2019 Experimental Biology meeting to be held April 6-9 in Orlando, Fla.

“Our study is the first to investigate thrombospondin-1 during acetaminophen toxicity,” said McMillin. “We were able to identify cell communication pathways that do not work properly during acetaminophen-induced liver injury and thus lead to worse outcomes.”