In the latest episode of their Renegades podcast, Bruce Springsteen and former President Barack Obama discuss growing into their identities as dads, and the challenges of having to do so without having had good role models in their own fathers. Spoiler Alert: They did phenomenally well at it, but how? 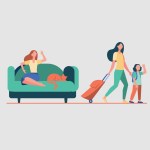 “I think that was the question, ‘Am I capable of not disappointing?’” Springsteen said of his doubts before becoming a dad. “You’re never completely sure, I suppose, but after the children were born and you start to find the resources you have inside you.”

Obama and Springsteen agreed that their wives and children were instrumental in showing them that they had inside of them everything they needed to be good fathers, and both describe their love for their children as “visceral.”

“I had no doubt the minute I saw that little creature with those big eyes looking up at me, I said, ‘My goodness. I will do anything for you,’” Obama said. “The love of being a father was not something I had to work on. It was physical, emotional, spiritual. The attachment to my children I felt entirely and completely. And I thought to myself, ‘OK. If the baseline is unconditional love. I’ve got that.’”

“I felt a fearless love for the first time in my life,” echoed Springsteen.

Though the love came automatically, both also talk about how their wives provided them with an example of how to parent.

Springsteen recalled keeping late hours, and that his wife, Patti, explained to him that he should get up earlier to be with the kids. “She just came over to me and she says, ‘You know, you don’t have to get up. But if you don’t ,you’re going to miss it … They’re at their most gorgeous at that moment in the morning, and you’re never going to see it.’ OK, I think I don’t want to miss that. You know? So I said, ‘What am I going to do?’ She says, ‘You’re going to make breakfast.’ … And ugh… she was right about the children. If I saw them in the morning it was almost like I had seen them for the entire day. And if I missed them in the morning you could never quite make up for it for some reason.”

Similarly, Michelle Obama had to instruct her husband about making the time to spend with his daughters.

“The challenge of fatherhood for me was the nature of my work was exhausting, all absorbing, and often took me out of town,” said Obama, who spent his kids’ early years launching his political career and becoming president. “And from Michelle’s perspective, in which family was not just a matter of love, was not just a matter of being present when you are there, but was a matter of physically being present because you’ve made choices and organized your life so that you can be with your family more.”

Obama made time to eat dinner with Michelle, Sasha, and Malia every night he was at the White House. He was surprised to find it easier to do so than when he was a senator, or campaigning, because as president he was “living above the store.”

“I have a 30-second commute and so I just set up a rule, I’m having dinner with my crew at 6:30 every night unless I’m traveling,” Obama explained. “And I’m going to be sitting there and I’m going to be entirely absorbed with stories about the annoying boys and the weird teacher and the drama in the cafeteria.” He describes these quotidian moments of eating with his family and tucking the girls into bed as a “lifeline” during his tenure as POTUS.

Letting love lead the way and soaking in the small moments may not be the most original parenting advice we’ve ever heard, but it’s impossible to listen to these two greats talk about their dedication to being present for their children without being moved. And maybe it will give us a little nudge to make sure we’re present at the dinner table tonight, too.

These celebrity moms make us all feel better when they share the highs and lows of parenting.