Progress pic! April Love Geary shared a shot of her post-baby body in a mirror selfie on Thursday, April 11.

“6 weeks postpartum,” the model, 24, captioned her Instagram Story. She sported animal-print lingerie in the photo. 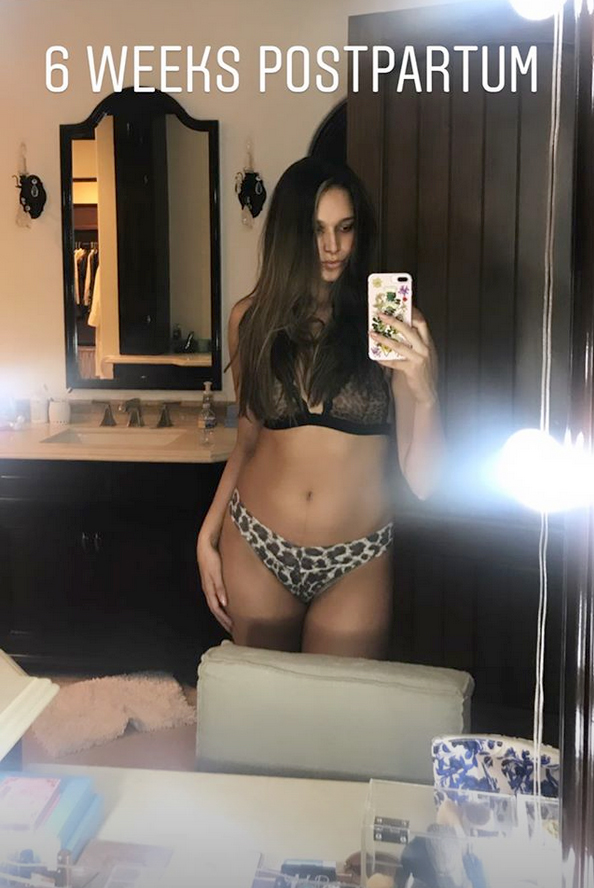 Geary and her fiancé, Robin Thicke, welcomed their second baby girl, Lola, in February. They are also the parents of daughter, Mia, 13 months.

“The best day of my life,” Geary wrote on Instagram after Lola’s arrival. “Holding my two girls together for the first time.”

The Grammy winner, 42, shared a father-daughter photo to social media that same day, writing, “Lola Alain Thicke was born this morning 2/26/19 at 8:21 am. Thank you God and April Love for this blessing!”

Before Lola’s arrival, Thicke told Us Weekly exclusively how he was spoiling Geary throughout her pregnancy.

“I try to dote on her, but it’s never enough,” he told Us at the time. “You can never dote too much.”

The “Blurred Lines” singer added: “When you already have a baby to take care of, you got plenty to do. So the closer we get now, we’re getting really excited and anxious. We’re very ready for this new baby to come.”

The couple got engaged in December 2018, four months after announcing that they were expecting their second child.

“YES YES 1000x YES,” Geary wrote alongside pictures and videos of the proposal.

After their second pregnancy announcement, the model was bashed for having back-to-back babies with a man she wasn’t married to — and she clapped back on Instagram.

“Why are women so obsessed with telling me I need a ring? Getting married is the easy part, seeing how you are together AFTER having the babies is the hard part,” she wrote on her Story at the time. “We’re in 2018. Not the 1950’s. Women don’t NEED to get married before having babies. Ya’ll need to chill.”

The musician also shares Julian, 9, with his ex-wife, Paula Patton. The two split in 2014.