We’ve covered plenty of incidents of dress codes that unfairly target — and sexualize — girls. But here’s a new and just as disappointing twist: a dress code blatantly reinforcing a tired old gender stereotype and stigmatizing the hair of a child of color.

Four-year-old Michael Trimble hails from Tatum, Texas, and like most kids, was pretty excited to meet his teachers for the new school year. His grandma, Randi Woodley — who’s had custody of him since he was four months old — took extra special care styling his hair.

“He was dressed up cute and had two long ponytails,” she told TODAY. “Usually he just wears one but this was a special occasion, so I took more time on his hair. 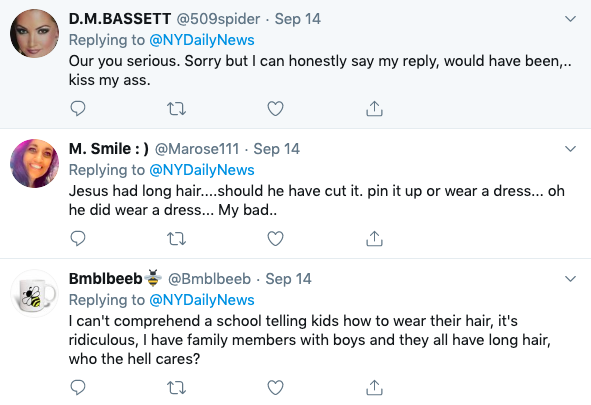 That’s when their conversation went completely off the rails. To make a point, Woodley asked why transgender students and female students had the option to wear hair long, but not Michael.

Woodley said the answer shocked her: “The superintendent then told me if I was so passionate about it that I could put Michael in a dress and send him to school with long hair. But I would have to let him know that when he’s asked if he’s a boy, he has to say he’s a girl,” she said. (Note: The district says this incident did not happen.)