Travis Barker has found a way to bond with girlfriend Kourtney Kardashian’s daughter Penelope — by sharing his passion for music.

The Blink-182 drummer, who has three children — daughter Alabama, 15, son Landon, 17, and stepdaughter Atiana, 22, with ex-wife Shanna Moakler — has been mentoring Penelope on the drums when she drops by his studio. Her newfound enthusiasm for the instrument, says Barker, is exciting. “You can’t be pushy, but you’re like, ‘Oh, do you want to learn to play something?’” he told Nylon on Wednesday, adding that he and Kardashian gave the girl her own drum set. “And she’s always bright-eyed and like, ‘Yes, like I’m so excited to learn how to play.’ So she caught on really quick, like super quick.”

Smart dad that he is, Barker tries not to push the activity on Penelope — although he does play teacher. “Not weekly, like, ‘OK, Penelope, we have to do lessons today.’ But when she wants to learn then, or learn something new, I like being there to fill that little space, that creative space in her head. I think next, she’s just going to record something at the studio,” he told Nylon. 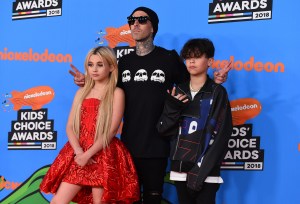 Likewise, Alabama and Kardashian have bonded, with the teen calling the reality star her “stepmom” on social media — a label that may or may not have irked Moakler. In the past, the model has accused Kardashian of putting “a wedge” between her and her children, who have publicly stated that their mom isn’t that present in their lives (which Moakler has denied).

Barker and Kardashian went public with their relationship in February with dramatic declarations, tattoos of each other’s names, and trips to Mexico and Italy. The first excursion was more than a lover’s retreat — it was Barker’s first plane ride since 2008, when the private aircraft on which he was a passenger, crashed after departing from South Carolina. Barker and his friend Adam “DJ A.M.” Goldstein were the only survivors although Goldstein tragically died the following year from an accidental drug overdose.

With Kardashian’s encouragement, Barker agreed to fly again, provided his girlfriend give him a 24-hour notice. “It’s still something very new to me, but having something that gives me the strength and hope to be able to overcome things that were so traumatic in my life, it just says a ton,” he told Nylon. “She’s definitely that for me. I’m invincible when I’m with her. It’s like I never dreamed, I never even considered flying again.”

During the interview, Barker also shared how being a father trumps anything he does in the studio. “I love being a dad. I always say that’s my best … it’s better than any song I’ve ever made or any accomplishment I’ve ever had or I’ve done,” he said. “I feel like being a dad, just nothing compares, you know?”

Barker’s friend, rocker Machine Gun Kelly, told Nylon that he shares Barker’s parenting ideologies. “We really bond as unconventional dads, and he’s a great role model as a dad and made me want to become an even better father,” he said. MGK has a 12-year-old daughter named Casie with ex Emma Cannon, while his girlfriend Megan Fox shares three sons with actor Brian Austin Green: Noah, 8, Bodhi, 7, and Journey, 4.

This year, the celebrity quartet — Barker, Kardashian, Fox, and Machine Gun Kelly — have been enjoying classic parent’s nights out together, celebrating MGK’s birthday, at concerts, and a UFC fight.

These are some of the reality-TV alumnae we love to follow as they tackle motherhood.