SACRAMENTO, Calif. — Should Gavin Newsom survive the Republican-driven attempt to oust him from office, the Democratic governor will face the prospect of paying back supporters who coalesced behind him.

And the leaders of California’s single-payer movement will want their due.

Publicly, union leaders say they’re standing beside Newsom because he has displayed political courage during the covid-19 pandemic by taking actions such as imposing the nation’s first statewide stay-at-home order. But behind the scenes, they are aggressively pressuring him to follow through on his 2018 campaign pledge to establish a government-run, single-payer health care system.

“I expect him to lead on California accomplishing single-payer and being an example for the rest of the country,” said Sal Rosselli, president of the National Union of Healthcare Workers, which is urging Newsom to get federal permission to fund such a system.

Another union, the California Nurses Association, is pushing Newsom to back state legislation early next year to do away with private health insurance and create a single-payer system. But “first, everyone needs to get out and vote no on this recall,” said Stephanie Roberson, the union’s lead lobbyist.

“This is about life or death for us. It’s not only about single-payer. It’s about infection control. It’s about Democratic and working-class values,” she said. “We lose if Republicans take over.”

Together, the unions have made hundreds of thousands of dollars in political contributions, funded anti-recall ads and phone-banked to defend Newsom. The latest polling indicates Newsom will survive Tuesday’s recall election, which has become a battle between Democratic ideals and Republican angst over government coronavirus mandates. The Democratic Party closed ranks around the governor early and kept well-known Democratic contenders off the ballot, leaving liberal voters with little choice other than Newsom.

“This is a crucial moment for Newsom, and for his supporters who are lining up behind him,” said Mark Peterson, a professor of public policy, political science and law at UCLA who specializes in the politics of health care. “They’re helping him stay in office, but that comes with an expectation for some action.”

But it’s not clear that Newsom — who will face competing demands to pay back other supporters pushing for stronger action on homelessness, climate change and public safety — could deliver such a massive shift.

Reorganizing the health system under a single-payer financing model would be tremendously expensive — around $400 billion a year — and difficult to achieve politically, largely because it would require tax increases.

The concept already faces fierce opposition from some of Newsom’s strongest supporters, including insurer Blue Shield of California and the California Medical Association, which represents doctors.

No state has a single-payer system. Vermont tried to implement one, but its former governor, a Democrat, abandoned his plan in 2014 partly because of opposition to tax increases. California would not only need to raise taxes, but would also likely have to seek voter approval to change the state constitution, and get permission from the federal government to use money allocated for Medicare and Medicaid to help fund the new system. 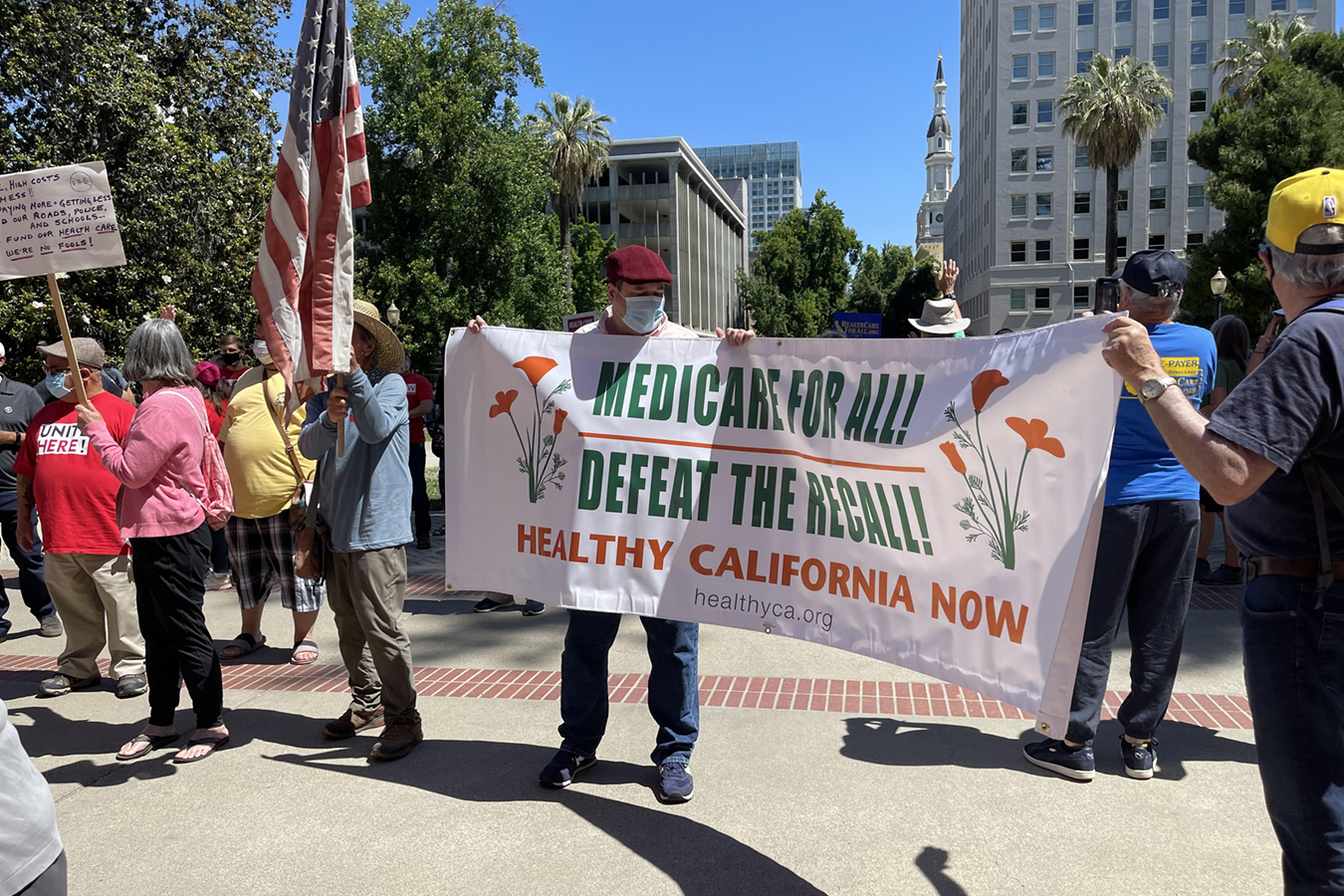 The last big push for single-payer in California ended in 2017 because it did not adequately address financing and other challenges. Leading up to the 2018 gubernatorial election, Newsom campaigned on single-payer health care, telling supporters “you have my firm and absolute commitment as your next governor that I will lead the effort to get it done,” and “single-payer is the way to go.”

In office, though, Newsom has distanced himself from that promise as he has expanded the existing health system, which relies on a mix of public and private insurance company payers. For instance, he and Democratic lawmakers imposed a health insurance mandate on Californians and expanded public coverage for low-income people, both of which enrich health insurers.

Newsom has, however, convened a commission to study single-payer and in late May wrote to President Joe Biden, asking him to work with Congress to pass legislation giving states freedom and financing to establish single-payer systems. “California’s spirit of innovation is stifled by federal limits,” Newsom wrote.

Newsom’s recall campaign, asked about his stance on single-payer, referred questions to his administration. The governor’s office said in prepared comments that Newsom remains committed to the idea.

“Governor Newsom has consistently said that single-payer health care is where we need to be,” spokesperson Alex Stack wrote. “It’s just a question of how we get there.”

Stack also highlighted a new initiative that will build up the state’s public health insurance program, Medi-Cal, saying it “paves a path toward a single-payer principled system.”

Activists say Newsom has let them down on single-payer but are standing behind him because he represents their best shot at obtaining it. However, some say they’re not willing to wait long. If Newsom doesn’t embrace single-payer soon, liberal activists say, they will look for a Democratic alternative when he comes up for reelection next year.

“Newsom is an establishment candidate, and we as Democrats aren’t shy about ripping the endorsement out from under someone who doesn’t share our values,” said Brandon Harami, Bay Area vice chair of the state Democratic Party’s Progressive Caucus, who opposes the recall. “Newsom has been completely silent on single-payer. A lot of us are really gunning to see some action on his part.”

State Assembly member Ash Kalra (D-San Jose), who also opposes the recall, will reintroduce his single-payer bill, AB 1400, in January after he paused it earlier this year to work on a financing plan. Its chief sponsor is the California Nurses Association.

Using lessons learned from the failed 2017 attempt to pass single-payer legislation, the nurses union is deploying activists to pressure state and local lawmakers into supporting the bill. Resolutions have been approved or are pending in multiple cities.

“This is an opportunity for California to lead the way on health care,” Los Angeles City Council member Mike Bonin said before an 11-0 vote backing Kalra’s single-payer bill in late August.

Kalra argued that support from Los Angeles shows his bill is gaining momentum. He is also preparing a new strategy to take on doctors, hospitals, health insurers and other health industry players that oppose single-payer: highlighting their profits.

“They are the No. 1 obstacle to this passing,” Kalra said. “They’re going to do whatever they can to discredit me and this movement, but I’m going to turn the mirror around on them and ask why we should continue to pay for wild profits.”

An industry coalition called Californians Against the Costly Disruption of Our Health Care was instrumental in killing the 2017 single-payer bill and is already lobbying against Kalra’s measure. The group again argues that single-payer would push people off Medicare and private employer plans and result in less choice in health insurance.

Single-payer would “force these millions of Californians who like their health care into a single new, untested government program with no guarantee they could keep their doctor,” coalition spokesperson Ned Wigglesworth said in a statement.

Bob Ross, president and CEO of the California Endowment, a nonprofit that works to expand health care access, is on Newsom’s single-payer commission. He said it will work through “tension” in the coming months before issuing a recommendation to the governor on the feasibility of single-payer.

“We have a camp of single-payer zealots who want the bold stroke of getting to single-payer tomorrow, and the other approach that I call bold incrementalism,” Ross said. “I’m not ruling out any bold stroke on single-payer; I would just want to know how we get it done.”