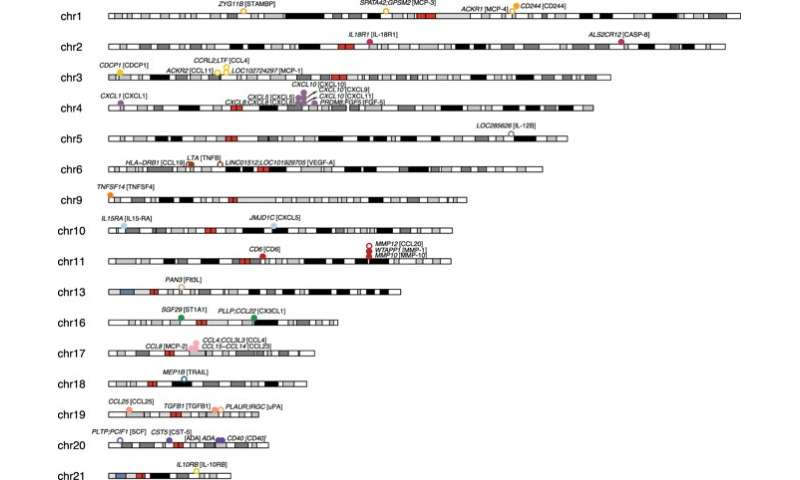 A new study from Uppsala University shows that whole-genome sequencing increases the precision of genetic studies, which in turn can improve our understanding of how to use biomarkers to discover disease. The results are published in the scientific journal Scientific Reports.

Biomarkers, such as specific proteins circulating in our blood stream, are often used in the clinic as indicators of biological processes connected to disease. Proteins in our body are affected not only by disease progression but also by environment and lifestyle, as well as our genetic material. The best proteins for diagnosis are preferably not affected too much by genetics, since this can cause difficulties in good diagnosis of disease.

In this study, researchers have investigated protein biomarkers that increase or decrease with inflammation in around a thousand individuals from a Swedish health study. In contrast to earlier studies, which only examined selected genetic positions, the researchers have performed an analysis using newer techniques to investigate all genetic positions in an individual, a whole-genome sequencing. By looking at over three billion positions in our genetic material, the researchers found 18 new genes that are regulated in disease, for example in Crohn’s disease and rheumatoid arthritis.

This study shows that a larger set of inflammatory biomarkers are affected by our genes than previously believed, but also that many of the biomarkers seem to be directly linked with the risk of developing an inflammatory disease.

“We saw that individuals with genetically increased levels of several inflammatory biomarkers also had an increased risk of inflammatory bowel disease (IBD),” says Julia Höglund, Ph.D. student at the Department of Immunology, Genetics and Pathology at Uppsala University, and one of the leading researchers behind the study.